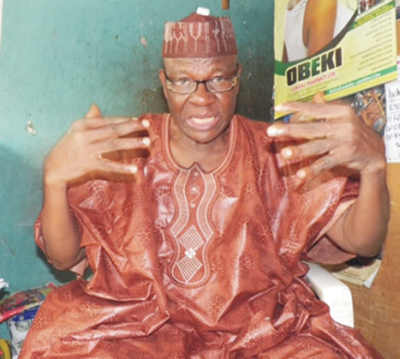 Abraham Olatunbosun Oladapo is a Yoruba philosopher & poet popularly known as Odidere-Ayekooto Akewi (The loquacious parrot). The prominent Yoruba poet is a promoter of Yoruba language.

Abraham Oladapo is no doubt a brilliant folk poet, a distinguished playwright, a fantastic music producer, a fine broadcaster and a profound researcher. His thrills and prowess fetched him the nickname” Odidere-Ayekooto Akewi” by his listeners and admirers.

The legendary poet was born 73 years ago on the 19th of September 1943 in the ancient city of Ibadan. He attended Phillip’s Primary School in Araromi Owu and then proceeded to St James’ Olanla in Akinyele, Ibadan. Shortly after his talent was discovered while he was in school, he was offered Scholarship to study a diploma in Yoruba Studies at the University of Lagos, a programme which he completed with a distinction.

Olatunbosun underwent training as a teacher at St. Luke’s Teachers’ Training College Ibadan. His first presentation at the school in the 1965 festival of arts afforded him the opportunity of presenting a Yoruba Ijala, a presentation which he chanted gracefully in front of judges who had come from the two reputed radio stations at that time; Radio Nigeria and the Western Nigeria Broadcasting Corporation (WNBC). The judges acclaimed his efforts and encouraged him to develop the skill, especially since it was the first time anyone was chanting an Ijala on stage. His first play ‘Ogun Lakaye’ attracted popularity and fame which made him blossom thereafter.

He completed the Teacher’s Training Programme in 1967 and was posted to St. Davids School, Kudeti, Ibadan. In 1969 he joined “The Sketch newspaper”, GbounGboun, a Yoruba newspaper where he worked for a year and then moved to Western Nigeria Television (WNTV), Western Nigeria Broadcasting Service (WNBS) in 1970. In WNTV/WNBS, he met the likes of Adebayo Faleti, who impacted on him greatly and Prince Adebayo Sanda, the presented of Kaaro Ooojiire and Tiwa N’ tiwa. By this time, he had also become like a flag-bearer for the Yoruba culture, traversing the whole of Yorubaland. He worked as a as a Radio/ TV Presenter until 1977 when he discovered that there are a number of untapped human resources in Yorubaland, seizing the opportunity to build on the passion.

He published his first book at the age of 22, and wrote Ogun Lakaaye when he was 28 years old. So far, He has released about 29 different books, some of which are used as recommended text across primary and secondary schools and even Universities. Aroye Akewi was recommended for WAEC as far back as 1972, while his play Ogun Lakaaye and Egbade Falade, were joint prize winners of the Oxford University Press drama competition in 1970.

Some of his ewi album includes; Taa Le ntan? (Who are you deceiving?) and Ara Igbaun Da? (Where are the men of yesteryears?), Osuka fe peleru, Osupa Ife,

The Yoruba Philosopher poet has been conferred with over 200 awards and certificates. He was also honoured with the title of Aare Afedegbayi of Yorubaland by the Egbe Awon Colleges of Education of Nigeria in 2014.

Interestingly, some of his children have taken after his profession as Yoruba scholars and lecturers.