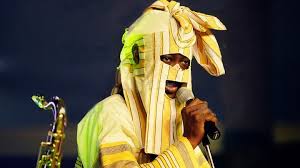 Lágbájá (born Bisade Ologunde) is a Nigerian Afrobeat musician, singer and song-writer. He was born in 1960 in Lagos State. He is from Odogun’s Compound, Ijagbo Community in Oyun Local Government Area of Kwara State, North Central Nigeria. As a child, he was fascinated with musical instruments and ended up learning how to play number of them. His first instrument of choice was the harmonica with which he used in winning a couple of competitions during his early years living in Ibadan, Oyo State.

In the 1970s and 80s, when artists such as King Sunny Ade, Alhaji Sikiru Ayinde Barrister, General Ayinla Kollington, and Ebenezer Obey among others sang songs that bordered on philosophy, entertainment and human sociology, there was also Fela Anikulapo Kuti, the pioneer of African Afrobeat, whose music openly and explicitly satirized politicians and the government institutions of Nigeria and Africa at large. After the death of Fela in 1997, Lágbájá emerged to reiterate the resounding gospel of Fela.

His musical career started in the wake of the cancelled Nigerian presidential elections of 1993 when he released his self-titled album, Lágbájá. The ingenuity of his music was unique with influences from different musical traditions all over the world. His music borrowed largely from the rich Yoruba language and his music is often instrumental and infused with a mix of Yoruba percussions, drums, poetry, synthesizers, engaging chants, and western instruments, especially the saxophone.

However, the instruments that holds all his songs together is his masterful use of drums with an emphasis on the traditional Yoruba drums. In creating his melodious and modified grooves and moods, Lágbájá utilizes four families of these drums: dundun/gangan, bata, ogidi and iya ilu (means mother drum in Yoruba). Lágbájá’s ensemble of drummers form the larger part of his band and the vocalists and instrumentalists make up the rest. When he sings in English, Yoruba, Pidgin English or the three combined in a fashion of his choice, the impact of his music is deployed beautifully like a prudently carved sculpture.

Lágbájá has been compared to Afrobeat pioneer, Fela Kuti, because he tends to release his albums around election time in Nigeria and does not shy away from using his music to denounce government malpractices. “I grew up on Fela,” he says, but denies being an Afrobeat musician. “I don’t call my music Afrobeat, but I really don’t care about names,” he continues. “They’re just for description. Over time, I think eventually you will see that what I care about is to talk about the beats and the drums.”

His music has also been described as Afrojazz among other appellations but he prefers Africano because of his attachment to his cultural heritage and roots. Not only does Lágbájá’s entertain, he also considers societal issues ranging from inept government, clueless politicians, human indifference and carelessness and the failure to preserve African culture, heritage and values.

Since 1993, Lágbájá has steadily created a legion of adoring fans and has grown in popularity to become one of Nigeria’s top and most successful artists. Lágbájá’s C’est Une African Thing, which was released in 1996, became Nigeria’s most popular album of the year. With featured classic hits such as Bad Leadership and Coolu Temper, the album delivered relevant and thought-provoking themes to an appealing and danceable beat. Music lovers caught the “Lágbájá Fever”, his fans kept on asking for more and his songs stayed on the airwaves for quite a while. Less critical than the lyrics of Fela Anikulapo Kuti and more candid than the adage and figurative messages and tales of Ebenezer Obey and King Sunny Ade, Lágbájá’s chooses to challenge the status quo and provides hope and optimism for a better Nigeria. In 1995, Lágbájá was involved in the International Red Cross sponsored campaign called “WOZA AFRICA”. The campaign focused on bringing global attention to the predicament of “child soldiers” in Africa’s regions of war and conflict.

Staying true to the message of his music, Lágbájá (with a few other artists) visited and performed in major African conflict zones and wrapped up the tour with a live concert in Paris, France. Nearly 25 years later, his message and approach has not changed and he recently said that he hopes to build a bridge between the masses and the people in power through his music and his humanitarian efforts

In March 1997, Lágbájá opened a club called Motherlan’ in Ikeja, Lagos State. The purpose of the club was to serve as a venue where the past could be brought back through songs and dance. Motherlan’ came to be as a result of Lágbájá nostalgia for the African moonlight stories which were told in the town square. Some folks have also likened the idea of Motherlan’ to the old Afrika Shrine created in 1970 by Fela Kuti.

Later in 2000, Lágbájá released three captivating and individually unique albums, WE, ME and ABAMI. The commercial success of these albums combined with his rising influence as an artist would earn him 6 Nigerian music awards in 2001, including “Artist of the Year”, “Album of the Year” and “Producer of the Year”. His 9th album, 200 Million Mumu (The Bitter Truth), was released in 2012 and in the album, he talks about the state of the nation and he liberally takes shots at various Nigerian political figures.

Lágbájá’s masks are striking, and are his own personal designs. The colors, fabric, and patterns depend on the circumstances, but are usually a splash of brightness. The word “Lágbájá” is a Yoruba word that means “nobody in particular” and connotes “facelessness” in a relative metaphorical sense of the word. Some critics have opined that Lágbájá’s use of mask is an act of cowardice, but the musician himself explained that the reason for wearing the mask is to represent the hopeless, voiceless and faceless in the society. Another reason behind adopting the use of a mask is to demonstrate that anyone can make a change in the society; a belief he unavoidably expresses in his songs.

Lágbájá’s Africano is driving a resurgence of interest in sophisticated African music, rich in the traditions of the continent while cosmopolitan in attitude. In a bid to share his African grooves with the rest of the world and make African rhythms understandable and accessible to everyone, Lágbájá has developed and produced the first ever comprehensive digital library of “drag and drop” Yoruba grooves he calls “Africano Manchine”. An artistic marriage of man and machine, Africano Manchine works seamlessly with popular Digital Audio Workstations such as Ableton Live and Pro Tools and plays a major role in his newly pioneered Elektro Groove Music (EGM).

Lágbájá has taken his music beyond the shores of Nigeria, performing in festivals and several venues around the world. He is an embodiment of intellectualism, dedication, hard work, and the community spirit; ever willing to give back his intellect, time and resources for the greater good of his country and humanity.

DAWN Commission wishes you more years of creativity and hospitality to the world.