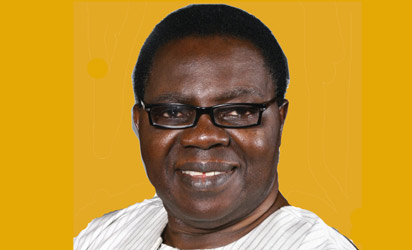 Chief Commander Ebenezer Obey whose real name is Ebenezer Remilekun Aremu Olasupo Obey-Fabiyi is a Nigerian jùjú musician who was born on 3rd April 1942 in Idogo, Nigeria. He is of the Owu subgroup of the Egba-Yoruba ethnic background.

Obey’s music career began expectedly as a young man in church. He lent his voice to hymns, cantatas and divine praise songs as a young vocalist. Fate paved his path out of Idogo to Lagos where he began his tutelage to becoming an accomplished musician. That journey led to playing with a lot of notable musicians including the Agidigbo exponent, the late Fatai Rolling Dollar, whom he played with for about six years.

Obey formed his first band called Royal Mambo Orchestra in 1957 but it was not until 1964 did he score his first Juju hit. Obey was a prolific musician whose sound has evolved over the years many times to suit the era and explore the diversity of Juju music. His early offerings had the markings and influences of Highlife music; in fact, one of his most evergreen hits, Ori Bayemi, borrows its tune from Rex Lawson’s Twi number, Jolly Papa. In the 60s, Obey was doing what he called a fusion of Juju and Highlife music.

Perhaps the most accomplished song from this period is that love song, Paulina, named for the lady with whom he had a seaside exchange with. The song entirely structured in a call-to-response format enjoins participation in a love-at-first-sight story where a man’s visual percept becomes a life fixture in an effortless manner of dance and prayers.

Quite expectedly, Obey’s style moved away from short and set pieces that the rpm technology dictated to the more expansive orchestra-like medleys of the 70’s. One of his funkiest releases at this time was “Board Members”, a big hit throughout Nigeria and one of his most memorable tunes. Juju music is typically soulful and mid-tempo but Obey’s style was deliberately mellower as years passed. He calls his style of Juju, Miliki, an onomatopoeic adjective that probably derives meaning from the Anglophonic word, “Meek”.

Obey began to tell expansive and subtly didactic stories that span the entire length of his medleys. Perhaps the most accomplished song of this era—The Horse, The Man and The Son—was a delightful parable about how satisfying mankind was a herculean if not impossible task. Obey’s brand of Juju music, in being mellow and reflective, became more interested in becoming a social conscience. The message of Obey’s music, even before he became an evangelist, had a subtle charge to listeners to be good to themselves and each other.

In the early ‘80s, Obey released a series of albums that took care of all social events that the party-loving Yorubas engaged in. This was quite timely because Juju music fell out of popularity on account of the rise of Fuji music as well as an economic decline that sharply contrasted the oil boom of the ‘70s that ensured Obey had become a superstar millionaire.

The 90’s found Ebenezer Obey in the church where he consecrated himself to God and became an Evangelist. He began his own ministry where he used both song and sermon to win souls for Christianity. Although he kept waxing albums at this time, the music began more somber than mellow and intensely preoccupied with Christian themes.

At 78, Chief Commander Ebenezer Obey has more than 100 albums to his name and he has sons who, like him, make music. He has left indelible footprints in our national consciousness.

We all celebrate you sir.

You are an Akinkanju.