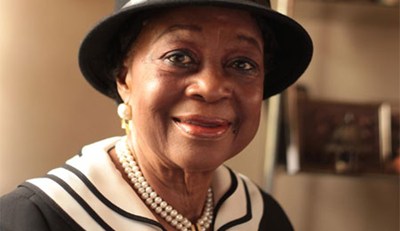 Chief Folake Solanke is the first female Senior Advocate of Nigeria (SAN). Aside from being a legal giant, she is also a teacher and a public administrator of note. Her enormous career accomplishments have anchored a personality that is audacious and steely.

A second look at the subjects that she chose to study before she studied law—Latin and mathematics—makes this evident. That at a time in history when educating women was neither fashionable nor encouraged by society, a woman would dare to pursue higher education, is remarkable. Yet more telling still is the fact that she chose to do so in areas of study that even men dreaded. It is no surprise therefore that Folake achieved for herself an enviable place in history.

Folake Odulate was born on 29 March 1932 to Jacob and Sekumade Odulate in Abeokuta, Ogun State. Her father was the notable Nigerian pharmacist who patented the popular drug Alabukun and made a fortune manufacturing drugs for the Nigerian market.

She started her primary education in 1937 at the Ago-Oko Primary School before transferring to Emo Girls’ School in 1940. There she completed her primary school education in 1944. In 1945, she got admission to the Methodist Girls’ High School, Lagos, where she regularly won first prize in English and mathematics. She completed her secondary school education in 1949, having obtained a Grade One Certificate after her West African School Certificate Examinations. After a year at Queen’s College, Lagos she proceeded to Newcastle University (formerly University of Durham), England, for her bachelor’s degree in Latin and Mathematics. Upon her graduation in 1954, she immediately pursued another studies in education discipline and obtained a diploma certificate in 1955 with 2nd Division.

After obtaining her diploma in education, she got employment as a teacher at Pipers Corner School, Great Kingshill, High Wycombe, Buckinghamshire, where she taught Latin and mathematics for 2 years. She later joined St Monica’s High School, Essex in 1957, also teaching Latin and mathematics for one year. Folake’s career trajectory took a new direction at this point when in 1960 she enrolled for a degree in law at Gray’s Inn, London, completing her studies in 1962, and thereafter returned to Nigeria to practise law. Career as a LAWYER

Interestingly, upon her return to Nigeria, Folake’s first job was once again as a teacher of Latin and mathematics, at the Yejide Girls’ Grammar School. Side by side with teaching, she also worked as a lawyer with the chambers of the Honourable Justice Michael Adeyinka Odesanya, who was her brother-in-law, in Lagos. In May 1963, she moved to the chambers of Chief Frederick Rotimi Akintola Williams in Ibadan as a junior counsel.

In the same month of May in 1963, she was called to Bar in absentia in the UK. She rose steadily at Chief FRA Williams Chambers to become a senior counsel before she later left to establish her own law chambers, which she named Alabukun Chambers in honour of the memory of her father’s remarkable work formulating drugs for the Nigerian market, particularly the patented popular drug of the same name.

She has since been running her chambers but had a few times taken up other appointments. For example, in 1972, she was appointed commissioner, Western State of Nigeria. She also served as Chairman, Western Government Broadcasting Corporation Television and Radio Network Service.

Notably but hardly surprising, the idea of becoming a senior advocate never occurred to Folake until her former boss Chief FRA Williams suggested that she apply for it. This was during a visit to the famous legal icon. Subsequently, she began to work on the criteria she had to fulfill to be a Senior Advocate of Nigeria (SAN) and later applied. One day, while working in her chambers, she received a call from Dr. Graham-Douglas who was a member of the SAN committee that her application was successful.

In 1981, she was named a Senior Advocate of Nigeria, becoming the first female to reach that milestone. The Yeyemofin of Ife, a title conferred on her by the Ooni Oba Okunade Sijuwade Olabuse II, has held many positions in various institutions and associations covering a wide spectrum of activities. In 1986, she sat as a member of a tribunal that reviewed politicians’ court sentences.

In 1987, she was offered a position by the president of the Court of Appeal as a judge in the Court of Appeal. However, she turned down the offer due to her strong involvement in the activities of Zonta International, an international women-interest service organisation based in Illinois, USA. On 21 July 1994, she became the 42nd president of Zonta International, on the fourth time of asking. It was another first for Folake as she became the first black woman ever to head the century-old organization founded in 1919.

Folake Solanke was awarded the International Bar Association Outstanding (IBA), International Woman Lawyer Award in 2012 at the IBA 5th World Women Lawyers’ Conference in London in recognition of her professional excellence and contribution to the advancement of women in the legal profession. She has published two books, “Reaching for the Stars ” (2007) and “A Compendium of Selected Lectures and Papers ” (2012). She has written numerous papers and publications covering vast areas including law, women’s rights, Zonta and the Christian faith.

Folake is a devout Christian and was married to Toriola Solanke. Together they had three children. Dr. (Mrs) Oluyemi Koya is a medical doctor and a lawyer; B. A Solanke, an engineer; and Miss Olushola Solanke, a mathematician and MBA London Business School degree holder.

Now that Chief Folake Solanke(SAN) is no longer in active service, she devotes her time mentoring young lawyers who aspire to reach the heights that she herself reached in the legal profession.

Chief Folake Solanke is no doubt, a rare breed. She is a woman whose trailblazing feats in the legal profession in Nigeria have inspired many women in the industry.

We, at DAWN Commission celebrate you.