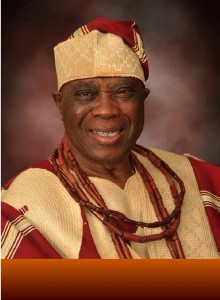 He wanted to be a Radio Engineer as it was a novel profession at that time. But before he began his career in broadcasting, he worked briefly with the civil service in Ibadan because government policy demanded that he must have completed his O’ Levels with at least five credits.

He started work at the radio broadcasting corporation as a radio engineer before moving to Western Nigeria Television (WNTV) established by Obafemi Awolowo in 1959. At WNTV, he was in charge of sound system engineering until six months into the job when the station decided to establish a commercial radio service, WNBC on April 1, 1960.

He then started to work with WNBC having been transferred there for six months. This effectively inaugurated him into the world of advertising. He started as a Production Unit Officer in the Commercial Services department and remained there till he resigned in 1963 to work in the private sector.

His first experience in the private sector was with the West Africa Publicity Limited (later, Lintas Limited) as a trainee Client Service Executive. At that point in time, Olu Falomo had received the City and Guilds training as a telecommunication engineer. He later rose to the position of Client Service Director, before he moved to Ogilvy, Benson and Mather Nigeria Limited as an Executive Director. In 1986, he established Forum Advertising Nigeria Limited, which he ran as the Managing Director/Chief Executive Officer until his retirement. Today Olu Falomo sits on the board of many companies.  He is the Chairman of Reckitt Benckiser Nigeria and the Principal Consultant of Olu Falomo & Associates. He is a  member of the Advisory Board of Vis Mundi, an investment company that focuses on Fast Moving Consumer Goods (FMCG) and Consumer Healthcare in parts of  Africa. He has also invested time in the promotion and development of the advertising business in Nigeria. During his career, he held positions as President or Council Member of several advertising professional bodies like the Association of Advertising Agencies of Nigeria (AAAN), the Nigeria Chapter of the International Advertising Association (IAA) and the Advertising Practitioners Council of Nigeria (APCON). In December 1999, he was appointed by President Olusegun Obasanjo as the Chairman of APCON and served in that capacity for four years.

From 1990 to 1994, he served as a member of the World Board of Directors of the International Advertising Association (IAA).

Olu Falomo can thus be described as a man who found success and fortune in a field other than his dream career. His initial dream was to be an engineer. But by a twist of fate, he was diverted to advertising instead and greatly prospered by that accident.

Being someone whose life owes so much to charity; Chief Olu Falomo has passionately embraced charitable causes in order to return the favour.  Through various platforms, he has assisted many less-privileged or less-fortunate people in society. Since 1987, he has been doing charitable work with the Nigerian Society for the Blind, and has at different times been an Officer, Chairman of Council, and currently Trustee of the organization.

He is also on the board of the Nigerian Society for the Welfare of Retired and Elderly Persons (NISWERP), the Bloom Cancer Care and Support Centre. He is also the Patron of Aanu Olu Pre-school Unit for Physically challenged Children. Other humanitarian work includes his role as a member of the Board of Trustees of the D.O. Fagunwa Foundation, member, Board of Trustees of St. Paul’s Senior Citizens Foundation for Elderly Persons, Osun State UNDP/Assisted Sustainable Human Development Fund (OSSHDF), and member,  Bode Akindele Foundation.

Chief Olu Falomo is a renowned Socialite who is an active member of several Social and
Cultural Clubs among which are:

Chief Olu Falomo was married to Mrs. Hilda Titilola Falomo (nee Bajulaiye) a Lawyer and an Insurance Executive who passed on to the Great Beyond almost 26 years ago and they are blessed with Children and Grandchildren.

Because of his great humanitarian service, he has been honoured with so many chieftaincy titles including the Otun Baroyin of Oke-Ona Egba, Lomoofe of Ilare-Ijesa, and the Lofosan of Ifosan Quarters in Ilesa, Osun State. He was the Chairman of Annual Iwude Ijesa Planning Committee for over 5years running until he voluntarily retired in March 2019.

Chief Olu Falomo is no doubt, a rare breed.

He is unapologetically passionate and proud of his background as an Ijesa man.

We, at DAWN Commission, wish you more years in good health.