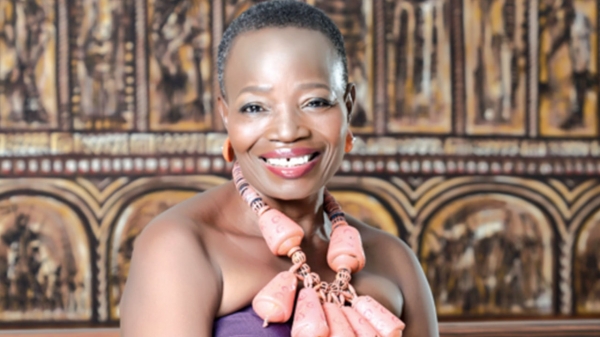 Chief Nike Davies-Okundaye was born in 1951 in Ogidi-Ijumu, Nigeria. She spent the early part of her life in Osogbo, which is recognised as one of the major centres for art and culture in Nigeria. During her stay in Osogbo, indigo dying and Adire production dominated her informal training. She was brought up amidst the traditional weaving and dying practice in her native village of Ogidi in present day Kogi State. Chief Nike’s artistic skills were nurtured at a young age by her parents and great grandmother who were musicians and craftspeople.

The dynamism of Nike’s compositions, coupled with the complexity and firm structure, emerge in her textile designs particularly for the adire and batiks. Nike brings to her adire a vivid imagination as well as a wealth of history and tradition regulating the production of adire. Adire is the traditional Yoruba hand painted cloth. Traditional adire designs are a myriad, full of meaning and history, which are combined into larger overall patterns with names that are universally recognised in the Yoruba culture.

She seeks to re-establish the value of adire as art, and to increase the appreciation of this meticulously designed, hand produced textile. For many years, this veteran adire artist has created both adire and batik works that glorify the social practices and the cosmic drama of Yoruba tradition. The prevailing indigo colour of her textiles accentuates the aura, mystery and beauty of her designs.

In 1981 she won the First Prize Award at the South West Arts Festival, Washington DC., USA. In 2004, she was appointed a member of the UNESCO Committee of the Nigerian Intangible Cultural Heritage Project and Artist in resident at the University of California, Berkeley, USA. In 2006, she was awarded one of the highest Italian national awards of merit by the Government of the Republic of Italy in appreciation of her efforts in using art to address and solve the problems of Nigerian prostitutes (sex workers) in Italy. She was also appointed a board member of the Federal Capital Territory of Nigeria Tourism Board at Abuja, Nigeria.

In 2007 she was invited by Harvard University, USA to conduct workshops and lectures on batik and technique of adire textile processing and African dyeing techniques. She was also invited by the University of South Florida, Tampa to conduct workshops and lectures at the Department of Women Studies and Art History, on batik and traditional African textile (Adire).

“CEPAN Foundation” of Nigeria awarded Nike a plaque of honor for being the African Art Icon of the year in 2009, and the National Drug Law Enforcement Agency (NDLEA) of Nigeria presented Nike with a golden plaque of honor in recognition of her noble role in the fight towards drug free Nigeria society in 2010. She has used her international success to launch a cultural revival in Nigeria. She is the founder and director of four art centres which offer free training to over 150 young artists in visual, musical and performing arts – one of which is the largest art gallery in West Africa, compromising over 7,000 artworks.

The centre also serves as a rich source of knowledge for traditional arts and culture to scholars and institutions. From her first solo exhibition at the Goethe Institute, Lagos in 1968, Nike has grown to become one of the major names on the international art circuit. In 2013 Chief Nike’s painting with the famous adire symbols in the background was accepted by the world’s largest museum, The Smithsonian. She ‘represents the new breed of African female artist, many of whose realities are now international, though in essence they are perpetuating the living tradition of female artists and ‘cloth-queens’, controlling heady empires of fabric- wealthy powerful women’. Nike is known all over the world for promoting her designs through exhibitions and workshops in Nigeria, USA, Belgium, Germany, Austria and Italy, to mention a few.

She is truly an Akinkanju of Yoruba race.