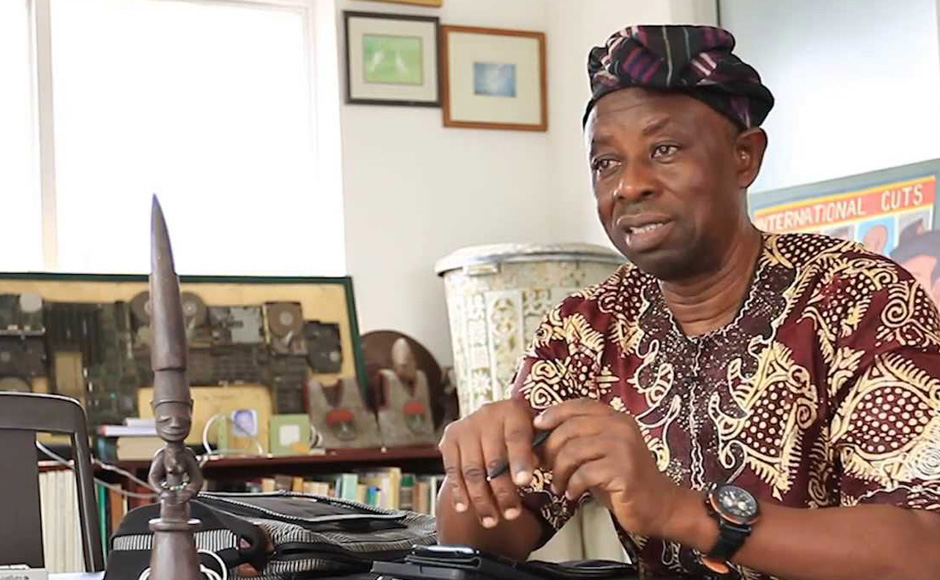 DAWN Commission felicitates with Tunde Kelani, one of the best Filmmakers and Cinematographers in the history of the Yoruba Nation, as he celebrates his Platinum Jubilee.

Tunde Kelani holds a Diploma in the Art and Technique of Filmmaking from the London International Film School, London. After many years in the Nigerian Film Industry as a Cinematographer, he now manages Mainframe Film & Television Productions, an outfit formed to document Nigeria’s rich culture.

Tunde Kelani, popularly known as “Uncle TK”, is an Intellectual Storyteller, a Talented Director, an Experienced Cinematographer, a Literary Enthusiast and an Accomplished Movie Producer in Television Production in Nigeria.

Uncle TK, like his favorites love to address him, has touched the lives of many, both at home and abroad, with his indigenous TV productions. The ace cinematographer was born in the city of Lagos 68 years ago on the 26th of February, 1948.

Tunde Kelani was raised by his grandparents in Abeokuta (Ogun State) in the Defunct Western Region of Nigeria. He attended the Oke-Ona Primary School in Ikija, Abeokuta and had his secondary school education at Abeokuta grammar school.

He took special interest in photography right from his primary school days up till secondary school after which he dedicated his time, energy and resources in mastering the art of photography.
Tunde Kelani was exposed to the Yoruba cultural ways of life and read Yoruba literatures from an early stage in life.

He was greatly influenced by theatre arts as the Yorubas had a strong travelling theatre tradition at that time. He was privileged to see most of the great Yoruba theatre classics including the Palmwine Drinkard, Oba Koso, Kurunmi, Ogunde plays and more during his secondary school days.

Tunde Kelani became an apprentice photographer in the Lagos studios after his secondary school career. He then joined the Western Nigerian Television as a trainee cameraman and proceeded to the London Film School, where he obtained a Diploma in Art and Technique of Filmmaking which led him on a career path that projected him to being one of Africa’s most prolific filmmakers.

Tunde Kelani worked as a BBC TV and Reuters’ correspondent. Shortly after he returned to Nigeria, he co-produced his first film with Adebayo Faleti titled “The Dilemma of Rev. Father Michael” otherwise known as “Idaamu Paadi Minkailu” in Yoruba language.

In 1990, Kelani was an assistant director on the set of a major American drama, Mister Johnson starring Pierce Brosnan, Maynard Eziashi and based on Joyce Cary’s 1939 book.
Tunde Kelani started his own production company, Mainframe Films and Television Productions – Opomulero in 1991.

Tunde Kelani shot an Ebola Virus awareness movie during the Ebola pandemonium in Nigeria. His recent production “Dazzling Mirage” is a must see, as it raises awareness on the gory and horrific effect of the Sickle Cell Disease, and this helps people make the right decision when choosing life partners. Without an iota of doubt, the well-respected Movie Producer knows his onions.