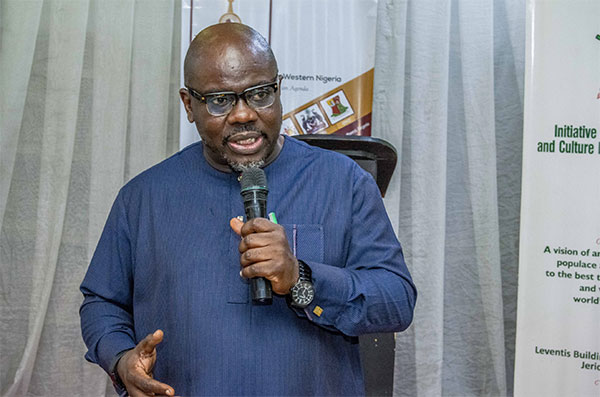 The Development Agenda for Western Nigeria, DAWN Commission has launched a leadership project for selected secondary schools in the city of Ibadan, Oyo state. This was done in collaboration with the Institute of Information, Arts and Culture Development (IACD), a non-governmental organisation based in Ibadan. The launch was done on Wednesday, 30th June, 2021 at the Conference hall of IACD in Jericho, Ibadan. In attendance were teachers and students from selected schools in Ibadan, officials and staff of DAWN Commission and in-house staff of IACD, Ibadan. In his introductory message to the participants, the Director General, DAWN Commission, Mr. Seye Oyeleye, congratulated the students citing their excellence and good records which influenced their eventual selection for participation at the event.; he also extoled their teachers who were present at the event too. He advised them to always strive to be excellent and better at their academics and other endeavours in life.  He admonished them to always demonstrate leadership qualities in their school, homes and immediate environment.

Similarly, the Director of IACD, Mrs Adefemi Bucknor-Arigbede in her message to the students, lauded DAWN Commission for the initiative of the event whilst also hoping for subsequent engagements between the two organisations, futuristically. She encouraged the students to continue to uphold values for personal growth and development and at the same time showcasing the qualities of an Omoluabi– which is a Yoruba mantra for a good and morally upright individual. She informed the students that IACD is always available for them to visit and engage in the use of its services as relating to books, research, internet and etc. She asserted to the students that leadership is an integral part of very body’s life. Hence, the students must stand up to the task and decide to act like leaders very early in life. There were other speakers at the event that had speaking sessions with the participants generally. Notable filmmaker, Bimbo Manuel, was present at the event and he spoke to the students on the importance of self-recognition, intentional decision making and critical self-evaluation as cogent things to be embarked on by people who want to succeed in the current world that we live in. He related his own personal life story and preached to the students on how not to make costly mistakes in their careers. He demonstrated leadership qualities to the students by using some his life experiences as a story. The Head of Programmes, DAWN, Mr Abiodun Oladapo also addressed the students. He commended their enthusiasm during the breakout period (a recess) which featured a question and answer session. At the end of the programme, the students were formally inducted into the Leadership programme by Mr Bimbo Manuel on behalf of both IACD and DAWN COMMISSION. There was also the recitation of the OMOLUABI pledge by the newly inducted session.