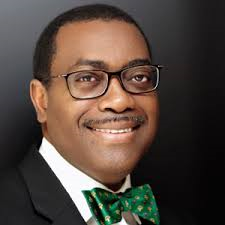 Dr. Akinwumi Ayodeji Adesina is the 8th elected President of the African Development Bank Group. He was elected to the position on May 28, 2015 by the Bank’s Board of Governors at its Annual Meetings in Abidjan, Côte d’Ivoire.  He took office at the Bank’s headquarters in Abidjan on September 1, 2015 and will serve an initial five-year term.

Dr. Adesina, born on 6th February, 1960, is a distinguished development economist and agricultural development expert with 25 years of international experience. He is the first Nigerian to serve as President of the Bank Group.

Dr. Adesina served as Nigeria’s Minister of Agriculture and Rural Development from 2011 to 2015, during which time he implemented bold policy reforms in the fertilizer sector and pursued innovative agricultural investment programs to expand opportunities for the private sector.

A bold reformer, as Minister, he turned the agriculture sector of Nigeria around within four years. Under his tenure, Nigeria ended 40 years of corruption in the fertilizer sector by developing and implementing an innovative electronic wallet system, which directly provides farmers with subsidized farm inputs at scale using their mobile phones. Within the first four years of launch, this electronic wallet system reached 14.5 million farmers, dramatically transforming their lives. A firm believer in private sector led growth, he changed the perception of agriculture in Nigeria from that of subsistence to a viable business undertaking, which successfully attracted $5.6 billion in private sector investment commitments. He also led financing initiatives to support youth engagement in agriculture as well as small and medium enterprises (SMEs). Ultimately, under his leadership, Nigeria’s food production expanded by 21 million metric tonnes, surpassing the 20 million metric tonnes target set out at the start of his tenure. Prior to his appointment as the Minister of Agriculture, he was the Vice President (policy and partnerships) of the Alliance for a Green Revolution in Africa (AGRA) where he led several bold policy and innovative finance initiatives that leveraged over $4 billion in bank finance commitments towards Africa’s agriculture sector. Working with Heads of State and Finance ministers, leaders of the commercial banking industry, and central bank governors across several African countries, Dr. Adesina successfully led one of the largest global efforts to leverage domestic bank finance for the agricultural sector. A consummate and highly effective builder of strategic partnerships, Dr. Adesina has worked effectively across several sectors of the economy to lift millions of people out of poverty.

In 2007, Dr. Adesina was awarded the prestigious YARA Prize in Oslo, Norway, for his leadership in pioneering innovative approaches to improve access to agricultural inputs for African farmers. He received the Distinguished Alumni Award from Purdue University, USA in 2008, the Distinguished Alumni Award in 2009 and the Grand Commander of Great Ife in 2013, both from the Obafemi Awolowo University.

He was awarded the Borlaug CAST Award in 2010 by the Council for Agricultural Science and Technology, USA, for his global leadership on agricultural science and technology. Dr. Adesina was awarded an Honorary Doctor of Humane Letters by Franklin and Marshall College, USA, for his innovative reforms and global leadership in improving the lives and livelihoods of the poor. In 2010, Dr. Adesina was appointed by the United Nations Secretary General, Ban Ki-moon, as one of 17 world leaders to galvanize international support for the United Nations Millennium Development Goals. Dr. Adesina also serves on the Global Panel on Agriculture and Food Systems for Nutrition, recently launched at the G8 Food and Nutrition Summit 2013 in London. In 2012, he was conferred with Nigeria’s second highest National Honor, the Commander of the Order of Niger, for his outstanding service to his country.

In 2013, Dr. Adesina won the Forbes Africa Person of the Year award for his bold reforms in Nigeria’s agriculture sector, which have empowered more than eight million farmers across Nigeria to embrace agriculture as a business. He is the first public sector Minister in Africa to win the award. The influential Leadership Newspaper selected him as the 2013 Public Servant of the Year, for his bold policy reforms, transparency, and public accountability.

Dr. Adesina has wide on-the-ground development experience in Africa having worked and lived extensively in 15 African countries, cutting across West, East and Southern Africa. While in Côte d’Ivoire he supervised 10 Doctoral theses in agricultural and development economics at the University of Abidjan, Centre Ivoirien de Recherches Economiques et Sociales (CIRES). He is bilingual and speaks fluent French and English.

Dr. Adesina is Nigeria’s Governor and Board member of the International Fund for Agricultural Development (IFAD) and is widely consulted by global development institutions, including the World Bank, the African Development Bank, the International Finance Corporation, the World Economic Forum and the Africa Union. He is celebrated as one of Africa’s leading development entrepreneurs based on his ability to develop and successfully execute bold initiatives that transform the lives of millions of people. His passion is to unlock wealth for African economies, end poverty, hunger and malnutrition and lift millions of Africa’s poor, especially women and youth, into Africa’s emerging middle class.

Dr. Adesina has been driving change in African agriculture for over 25 years and improving food security for millions across the continent. This is reflected in his several roles and activities which promote social economic development. By dint of hard work, persistence and diligent efforts, he has risen above many limitations to emerge as a notable figure and a true champion. His life story mirrors the resilience of an OMOLUWABI spirit and doggedness for which Yoruba people are well known.

We at DAWN Commission celebrates you, Dr. Adesina.