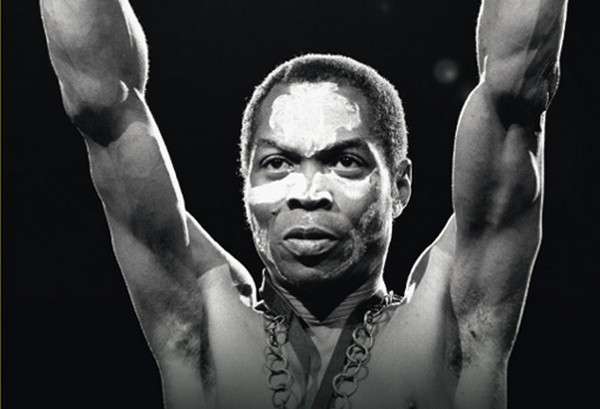 Fela was born Olufela Olusegun Oludotun Ransome-Kuti on 15 October 1938 in Abeokuta, Ogun State, Nigeria into an upper-middle-class family. His mother, Funmilayo Ransome-Kuti, was a feminist activist in the anti-colonial movement; his father, Reverend Israel Oludotun Ransome-Kuti, an Anglican minister and school principal, was the first president of the Nigeria Union of Teachers.

As a child, Kuti learned piano and drums, and led his school choir.He attended the Abeokuta Grammar School in Abeokuta. Later he was sent to London in 1958 to study medicine but decided to study music instead at the Trinity College of Music, the trumpet being his preferred instrument.

While in london, he formed the band Koola Lobitos, playing a fusion of jazz and highlife. In 1960, Fela married his first wife, Remilekun (Remi) Taylor, with whom he had three children (Femi, Yeni, and Sola). In 1963, Fela moved back to Nigeria, re-formed Koola Lobitos and trained as a radio producer for the Nigerian Broadcasting Corporation.

After Fela and his band returned to Nigeria, the group was renamed The Afrika ’70, as lyrical themes changed from love to social issues. He then formed the Kalakuta Republic, a commune, a recording studio, and a home for the many people connected to the band that he later declared independent from the Nigerian state. (According to Lindsay Barrett, the name “Kalakuta” derived from the infamous Black Hole of Calcutta dungeon in India.) Fela set up a nightclub in the Empire Hotel, first named the Afro-Spot and then the Afrika Shrine, where he both performed regularly and officiated at personalized Yoruba traditional ceremonies in honour of his nation’s ancestral faith.

He also changed his name to Anikulapo (meaning “He who carries death in his pouch”, with the interpretation: “I will be the master of my own destiny and will decide when it is time for death to take me”). He stopped using the hyphenated surname “Ransome” because it was a slave name.

Fela’s music was popular among the Nigerian public and Africans in general. In fact, he made the decision to sing in Pidgin English so that his music could be enjoyed by individuals all over Africa, where the local languages spoken are very diverse and numerous. As popular as Fela’s music had become in Nigeria and elsewhere, it was also very unpopular with the ruling government, and raids on the Kalakuta Republic were frequent.

In 1967, he went to Ghana to think up a new musical direction. That was when Kuti first called his music Afrobeat. In 1969, Fela took the band to the United States where they spent 10 months in Los Angeles. He discovered the Black Power movement in the US through Sandra Smith (now Sandra Izsadore), a partisan of the Black Panther Party. The experience heavily influenced his music and political views. He renamed the band Nigeria ’70. Soon afterwards, the Immigration and Naturalization Service was tipped off by a promoter that Fela and his band were in the US without work permits. The band immediately performed a quick recording session in Los Angeles that would later be released as ‘The ’69 Los Angeles Sessions’.

During 1972, Ginger Baker recorded Stratavarious with Fela appearing alongside Bobby Tench. Around this time, Kuti became even more involved in the Yoruba religion.

In 1977, Fela and the Afrika ’70 released the album Zombie, a scathing attack on Nigerian soldiers using the zombie metaphor to describe the methods of the Nigerian military. The album was a smash hit and infuriated the government, setting off a vicious attack against the Kalakuta Republic, during which one thousand soldiers attacked the commune.

Fela was severely beaten, and his elderly mother (whose house was located opposite the commune) was thrown from a window, causing fatal injuries. The Kalakuta Republic was burned, and Fela’s studio, instruments, and master tapes were destroyed. Fela claimed that he would have been killed had it not been for the intervention of a commanding officer as he was being beaten.

Fela’s response to the attack was to deliver his mother’s coffin to the Dodan Barracks in Lagos, General Olusegun Obasanjo’s residence, and to write two songs, “Coffin for Head of State” and “Unknown Soldier”, referencing the official inquiry that claimed the commune had been destroyed by an unknown soldier.

Fela and his band then took residence in Crossroads Hotel, as the Shrine had been destroyed along with his commune.
In 1978, Fela married 27 women, many of whom were his dancers, composers, and singers. The marriage served not only to mark the anniversary of the attack on the Kalakuta Republic but also to protect Fela, and his wives, from false claims from authorities that Fela was kidnapping the women.

Later, he was to adopt a rotation system of keeping only 12 simultaneous wives. The year was also marked by two notorious concerts, the first in Accra in which riots broke out during the song “Zombie”, which led to Fela being banned from entering Ghana. The second was at the Berlin Jazz Festival after which most of Fela’s musicians deserted him, due to rumors that Fela was planning to use the entire proceeds to fund his presidential campaign

In 1984, Muhammadu Buhari’s government, of which Kuti was a vocal opponent, jailed him on a charge of currency smuggling which Amnesty International and others denounced as politically motivated. Amnesty designated him a prisoner of conscience,[23] and his case was also taken up by other human rights groups. After 20 months, he was released from prison by General Ibrahim Babangida. On his release he divorced his 12 remaining wives, saying that “marriage brings jealousy and selfishness”.

Fela’s album output slowed in the 1990s, and eventually he stopped releasing albums altogether. In 1993, he and four members of the Afrika ’70 organization were arrested for murder. The battle against military corruption in Nigeria was taking its toll, especially during the rise of Dictator Sani Abacha. Rumors were also spreading that he was suffering from an illness for which he was refusing treatment.

Fela was known for his showmanship, and his concerts were often quite outlandish and wild. He referred to his stage act as the “Underground” Spiritual Game. Fela attempted making a movie but lost all the materials to the fire that was set to his house by the military government in power. Kuti thought that art, and thus his own music, should have political meaning.

It is of note that as Fela’s musical career developed, so too did his political influence, not only in his home country of Nigeria, not just throughout Africa, but throughout the world. As his political influence grew, the religious aspect of his musical approach grew. Fela was a part of an Afro-Centric consciousness movement that was founded on and delivered through his music. Fela, in an interview found in Hank Bordowitz’s “Noise of the World”, states, “Music is supposed to have an effect. If you’re playing music and people don’t feel something, you’re not doing shit. That’s what African music is about. When you hear something, you must move. I want to move people to dance, but also to think. Music wants to dictate a better life, against a bad life. When you’re listening to something that depicts having a better life, and you’re not having a better life, it must have an effect on you.”

In 2008, an off-Broadway production of Fela Kuti’s life entitled Fela!, inspired by Carlos Moore’s 1982 book Fela, Fela! This Bitch of a Life began with a collaborative workshop between the Afrobeat band Antibalas and Tony award-winner Bill T. Jones. The show was a massive success, selling out shows during its run, and garnering much critical acclaim. On 22 November 2009, Fela! began a run on Broadway at the Eugene O’Neill Theatre. Jim Lewis helped co-write the play (along with Bill T. Jones), and obtained producer backing from Jay-Z and Will Smith, among others. On 4 May 2010, Fela! was nominated for 11 Tony Awards, including Best Musical, Best Book of a Musical, Best Direction of a Musical for Bill T. Jones, Best Leading Actor in a Musical for Sahr Ngaujah, and Best Featured Actress in a Musical for Lillias White. In 2011 the London production of Fela! was made into a film. On 11 June 2012, it was announced that FELA! would return to Broadway for 32 performances.

Although Fela Kuti is late, he is remembered as an influential icon that was brave enough to boldly voice his opinions on matters that affected the nation through his music. Furthermore, to celebrate this icon there is an annual festival ceremony “Felabration” held each year to celebrate the life of this music legend and his birthday.