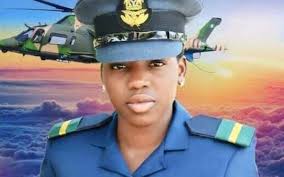 DAWN Commission commiserates with the Nigeria Air Force, family and friends of late Flying Officer Tolulope Arotile who died on 14th July 2020, as a result of head injuries sustained in a road traffic accident at the Nigerian Air Force Base in Kaduna State.

Tolulope Arotile was born on December 13, 1995, into the family of Mr. and Mrs. Akintunde Arotile of Iffe area in Ijumu Local Council of Kogi State.  She attended Air Force Primary School, Kaduna from 2000 to 2005 and Air Force Secondary School, Kaduna from 2006 to 2011, before gaining admission into the Nigerian Defence Academy, Kaduna, as a member of 64 Regular Course on the 22nd September 2012.

She was commissioned into the Nigerian Air Force as a Pilot Officer on September 16, 2017 and held a Bachelor of Science in Mathematics from the Nigerian Defence Academy. Arotile was selected to train at the Starlite International Training Academy, in South Africa, following her performance during her initial flying training course at 401 Flying Training School, Kaduna.

She was winged as the first ever female combat helicopter pilot in the Nigerian Air Force two years later, having completed pilot training courses at the Starlite International Training Academy, South Africa. The late officer was decorated as the first female fighter helicopter pilot the Nigerian Airforce has had in 55 years. She would later become Nigeria’s first female combat helicopter pilot to be so winged. The only other woman after her to reach that feat is Chinelo Nwokoye, who was winged in May 2020 this year. Arotile also had a commercial pilot license and also underwent tactical flying training on the Agusta 109 Power Attack Helicopter in Italy. In February 6, 2020, she introduced the newly acquired Agusta 109 Power Attack Helicopter to the President, Commander-in-Chief of the Armed Forces of Nigeria, President Muhammadu Buhari, during their induction ceremony at Eagle Square in Abuja.

She died on 14 July 2020, as a result of head injuries sustained in a road traffic accident at the Nigerian Air Force Base in Kaduna State. She was laid to rest according to military traditions on 23 July 2020 at the Military Cemetery, Abuja.

In her short but impactful stay, Arotile made the nation proud, having achieved a feat in the 55 years’ existence of the nation’s Air Force. She was instrumental in the fight against insurgency, especially in the North Central States by flying several combat missions under Operation GAMA AIKI in Minna, Niger State. She was a brave patriot who pushed her self beyond limits to demonstrate her uncommon love for the country.

By dedicating her young life to protect and defend Nigeria’s strength, honour and unity, her memory and legacy will continue to serve as a great inspiration to our youth especially our girls.