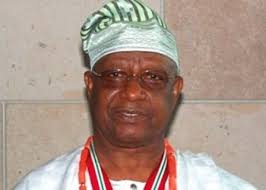 Christopher Oluwole ROTIMI was born on February 20, 1935, in Abeokuta. He attended Kings College Lagos, after which he earned a BA at the University College Ibadan.

He joined the Nigerian Army in 1960 and served as part of the United Nations Peacekeeping Force in the Democratic Republic of the Congo. He rose to become the first African Deputy Quartermaster General and the third non-white Quartermaster General of the Nigerian Army in 1966. During the Nigerian Civil War, Oluwole Rotimi provided logistics support for the Federal Government’s war efforts. He became the commander of the Ibadan Garrison between 1969 and 1970. He served as the Governor of Western State from 1971 to 1975 and became the Nigerian Ambassador to the United States in 2007.

He was attracted to the military as a student at King’s College, Lagos, and after a university degree that guaranteed him a rewarding future career in the civil service or private sector, compared with an uncertain future in the military, he chose that uncertain future of service to country. That motive force of patriotism, strengthened by an unwavering principle, was to characterize his conduct as a soldier, Quartermaster, military governor, and diplomat.

As Quartermaster General during the civil war, he had responsibility for supplies not just to the war front but to all army formations. A different actor would come out as a filthy rich guy and take an early retirement. It is however on record that this man of principle conducted himself so creditably that he earned the trust of the Commander-in-Chief and after the war, he was deployed to serve as the third Military Governor of the old Western State.

He took over as the Governor of Western State at the point when the Region was just recovering from the “wet e” crisis that followed the rigged 1965 Western Region election and the Civil War of 1967 to 1970. To make a lasting impact, he enlisted the support of the civil society and rallied traditional rulers. With a distinct approach to governance which emphasized leadership by example, he won the heart and minds of a cross section of the population who agreed with him that without peace there can be no development. He succeeded not only in restoring peace but in sustaining it. Knowing that government cannot satisfy the developmental desires of every community, his administration introduced the idea of self-help. Communities were to contribute a percentage of the project that they identified as their need with government contributing the balance. This was attractive to many communities, and the administration delivered on its promise.

When General Rotimi took over the helm of governance in 1971, there was a crisis of indiscipline arising from perceptions of favoritism and unequal treatment of equals in the civil service.

A man of principle and stern discipline would not condone acts of injustice and he made it clear. He was on top of every case of indiscipline, especially among the top echelon of the civil service, and he restored order and discipline.

General Rotimi deployed his welfarist credentials to pursue projects and create factories such as The Cement Factory at Shagamu, The Wire and Cable Factory in Ibadan, The Ceramic Factory in Abeokuta, The Wood Processing Factory in Ondo, and The palm oil Mill at Okitipupa, that deliver greater good for the greatest number towards the development of Western Region.

General Murtala Mohammed’s coup of 1975 terminated the Gowon administration. This ended not only the tenure of General Rotimi as military governor of Western State, it also ended his military career. At only forty years old, he was forced into an early retirement. He was called upon to serve the country as Ambassador to the United States of America in 2009 by President of Nigeria, Umaru Yar’Adua. As a man of principle, always tethered to his principles, he took his principles of honesty and self-discipline to his mission abroad.

Approaching his new assignment as he did as Military Governor, Rotimi was determined to root out indiscipline and corruption in high places. He decided to investigate what became of the proceeds of sold government properties. And that didn’t go down well with those who called the shots. He was unceremoniously recalled. But General Oluwole Rotimi had the last laugh as he was vindicated and his traducers shamed.

His comportment is replete with wisdom and piety while discussing national and security issues. He is no doubt, a rare breed. He is unapologetically passionate and proud of his Yoruba identity.

We, at DAWN Commission, wish you more years in good health.