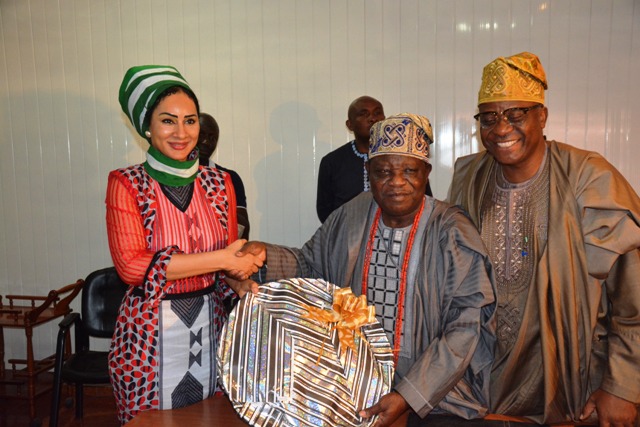 Jimoh Buraimoh is one of the most influential artists to emerge from the 1960’s experimental workshops known as the Osogbo School of Art.

Characteristic of the Osogbo movement, his work intermingles western media and Yoruba style and motif. Prolific in oil painting and etching, as well as his signature bead paintings and mosaic murals.

Jimoh Buraimoh was born in 1943 in Osogbo, Osun State. He is among distinguished artists permanently displayed at the Smithsonian Museum of African Art in Washington, DC. In addition to his smaller works, his colorful large-scale mosaic murals adorn public areas in Nigeria, Europe and the United States.

A pioneer in the history of modern art in Africa, Jimoh Buraimoh is the continent’s first bead painter, having in 1964, created a contemporary art form, inspired by the Yoruba tradition of incorporating beadwork designs into ceremonial fabrics and beaded crowns.

He represented Nigerian artists at the First All African Trade Fair in Nairobi, Kenya in 1972 and his work was presented at the Second World Black Arts Festival (FESTAC) in Lagos in 1977. In 1983 he became the first Nigerian to be awarded a membership in the Contemporary World Association of Mosaic Artists (Associazione Internazionale Mosaicisti Contemporanei) based in Ravenna, Italy and contributed to a global public-art statement for world peace in Ravenna’s Parco Della Pace.

The 1996 recipient of a Lifetime Achievement Award from the Center for African and African American Art and Culture in San Francisco, California, Jimoh Buraimoh has enjoyed international acclaim and worldwide popularity throughout his career. His 1997 mosaic mural, The Elders, commissioned by the City of Atlanta, Georgia USA and installed in the City’s Howell Park, received an Award of Excellence from the Atlanta Urban Design Commission as The Best Mosaic Mural of the Year.

Buraimoh’s works, widely exhibited in solo and group presentations, continue to be shown at the world’s finest galleries: In 2002 Jimoh Buraimoh was featured in Visions of Yoruba, a two-artist show at the October Gallery in London, England.

Important retrospectives in the United States include Colours of Africa, Contemporary Art from the Continent at Diggs Gallery at Winston-Salem State University in North Carolina in 2003; The World Moves – We Follow: Celebrating African Art at McClung Museum in Knoxville, Tennessee in 2002; and A Concrete Vision: Oshogbo Art in the 1960’s at the Smithsonian National Museum of African Art in Washington DC in 2000. His works are central to Beads, Body and Soul: Art and Light in the Yoruba Universe, a traveling exhibit organized by the Fowler Museum of Cultural History in California and shown at Carlos Museum at Emory University in Atlanta, Georgia in 1999.

In addition to creating art, Jimoh Buraimoh is a dedicated teaching artist. In 1974, as a guest of the United States government, he taught bead painting at Haystack Mountain Craft School in Maine and lectured at schools in New York City, Los Angeles, Boston and Baltimore and at Indiana University in Bloomington, Indiana.
He frequently conducts workshops in conjunction with his exhibits and contributes to outreach programs like October Gallery’s Engage in Art Project in London and the arts education program in the primary school system of Manchester, England.

Since 1997, he has been very active in community projects in the United States, especially in Atlanta, Georgia where he recurrently contributes to ArtsCool and other teaching programs sponsored by the City of Atlanta and the Fulton County Arts Council.

Artwork created by Buraimoh and his students in city-sponsored programs are permanently displayed at Atlanta’s Hartsfield-Jackson Airport.