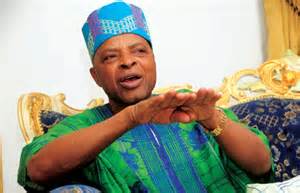 …a man so TRUE, a man so RESOLUTE

We celebrate General Ipoola Alani Akinrinade as he officially joins the League of Octogenarians.

A Consummate Omoluabi and a Fine Gentleman, in person of Dr. Adebowale Olukayode Adeagbo, celebrates his Golden Jubilee
Lieutenant General Ipoola Alani Akinrinade, “the General”, is a native of Yakooyo, in Ife North Local Government Area of the State of Osun.

He is a scion of the Akinrinade family well known for its refreshing attitude to life; a family of uncles, brothers and cousins who tend to “do their own thing”, so to say. It is a family that is proud and comfortable in its own skin; a family of Christians and Muslims and that of a man (General Akinrinade) who is neither.

Akinrinade, the general’s grandfather, was a direct descendant of Pa Adeteru Ogunyemi, from Ojo town in Egbedore Local Government Area of the State of Osun. The Ogunyemi family lived in Ojo until the early 1900s when local land disputes forced Ogunyemi and his family, including his sons – Akinrinade, Oparinde and Babarinde – out of Ojo, moving first to Oogi, near Ode-Omu and finally to Oke Oshin, which is now part of Yakooyo, Ife North Local Government, in what is now State of Osun. Yakooyo itself is part of the community known as Origbo, comprising seven towns – Akinlalu, Asipa, Ipetumodu, Yakooyo, Moro, Edunabon and Oyere (now sacked).

The Ogunyemi compound in Oke Oshin was and still is called Ile Sarepawo. There the family thrived and became the lynchpin of the community, widely loved and respected. On October 3, 1939, Alani was born to one of Akinrinade’s sons Emmanuel Olarewaju and his wife Victoria Olatundun. Alani grew up in his locality, among his cousins and family friends. In those days, and prior to the advent of Christianity in the town, the Ogunyemi clan was well known for its love of egungun (masquerade) and one of the biggest in Origbo was the family egungun called Lobanika. Legend had it that Lobanika was such a powerful egungun that five days before he came out, all other egunguns in Yakooyo and surrounding towns were warned not to come out on the same day as they would do so at their own peril. Young Alani loved the egungun festival and Lobanika so much so that he still talks nostalgically about the good old days and his own exploits with the family masquerade.

Alani Akinrinade had his primary education in Ipetumodu, an adjoining town and subsequently went to Offa Grammar School in what is now Kwara State for his secondary school education. He finished his secondary school education in 1958 and moved to Ibadan, capital of the old Western Region where he started his working life at the Ministry of Agriculture. His stint at the ministry made a lasting impression on him. He would become a full-time farmer in Yakooyo, years later, after his retirement from the army and grows cassava, exotic fruits and produces garri which his farm exports abroad. He is also into fish farming, among other things. Ironically too, his first portfolio as a minister in the Babangida administration was in the Ministry of Agriculture, Water Resources and Rural Development.

Living in Ibadan from 1959 exposed him to city life. Although he had been seeing soldiers who returned from World War II around the villages, Ibadan served as a vantage point to see serving soldiers from close quarters. For him though, joining the military was not a grand design. He wasn’t starry eyed about it but he was adventurous and coldly calculating. He loved marching soldiers and their uniforms, but the promise of a better pay and hope of advancement in life, all played a part in his decision to join the military in 1960, first going to Nigerian Military Training College, Kaduna and then a brief stay at Mons Officer Cadet School, Aldershot, England en-route the prestigious Royal Military Academy, Sandhurst, England from 1960 to 1962.
He attended other military institutions in Nigeria, United Kingdom and United States of America, including the Royal College of Defence Studies (formerly known as Imperial Defence College, London). He was commissioned as second lieutenant in the Infantry Corps on December 20, 1962. He was promoted lieutenant on 29 March 1963, captain on 29 Mar 1965, major on 10 June 1967, lieutenant colonel on 11 May 1968, colonel on 1 October 1972, brigadier general on 1 October 1974 and major general on 1 January 1976. He became commander of the Ibadan Garrison (1970–1971) and GOC of 1 Infantry Division (1975–1979). He was promoted to lieutenant general on 2 October 1979 and appointed Chief of Army Staff, and then became the head of the entire military as the first Chief of Defence Staff in 1980 during the civilian administration of President Shehu Shagari. He voluntarily retired from service with effect from 2 October 1981.

In one of his encounters with Newswatch magazine, it was said of Alani Akinrinade: “Chance and courage made the man. A chance meeting with General Yakubu Gowon in Ibadan took Akinrinade, then a young Captain to Lagos and the Ministry of Defence. And thus, began his climb up the ladder of success, and his close association with the “top hierarchy”. Courage earned him a place in history through his outstanding performance in the civil war, especially at Bonny in 1967, and his role in bringing the civil war to an end with the battle of Uli-Ihiala which led to Biafran surrender at Amichi on 13 January 1970; as well as in the abortive coup of Bukar Suka Dimka on 13 February 1976.”

Indeed, General Alani Akinrinade served Nigeria meritoriously. His exploits during the civil war are legendary and his intervention during the Dimka coup of 1976 through his command – 1st Division, based in Kaduna – ensured that the coup did not succeed. Although he retired from the Army voluntarily at the age of 42, there are many who still believe that his early departure had to do with the politics of the time under President Shehu Shagari and his own decision not to allow himself to become enmeshed in it. But as he’s always told those close to him, “military training prepares you for any type of situation.” He’s the living proof of that, a man who is comfortable in almost all situations and in most company, if not all. He hardly had any “withdrawal symptoms” as he just retired to farming in Yakooyo.

Military politics would intervene in his unhurried yet active life on the farm when Major General Ibrahim Babangida, on August 27, 1985, overthrew Major General Muhammadu Buhari and invited him to serve as Minister of Agriculture, then Minister of Industries and later, in 1989, as Minister of Transport. As minister, General Akinrinade was passionate about putting down a roadmap for the three ministries he superintended, showing his usual sense of urgency and discipline, his trademark in public life. He paid attention to details and didn’t suffer fools gladly. It wasn’t a surprise that in 1989 he left government after he felt no longer comfortable with it.

He returned to his farm thereafter, but the June 12, 1993, presidential election which was won by Chief M.K.O Abiola, was to change things dramatically for him. The annulment of the election by the Babangida administration on June 23, 1993, spiralled into a monumental crisis for the country for several years. Nigerians took sides either opposing or supporting the annulment but then General Akinrinade stood for a revalidation of the election result and thus became a pro-democracy campaigner, opposing the views of the governments of Babangida and General Sani Abacha on the issue. This pitted him against military officers he had worked closely with and put his life in danger under the Abacha regime.

He fled into exile in 1996, using the now famous NADECO route and stayed in the United Kingdom for a while until the UK became infested with Abacha’s assassins. He then left for the United States of America. There, with others, he continued to campaign for a return to democracy in Nigeria. When democracy eventually returned in 1999 and retired General Olusegun Obasanjo was elected president, General Akinrinade still didn’t rush back home. He was suspicious of the new government which he believed neither had a clear idea nor understanding of the constitution underpinning governance in the country. He eventually returned to Nigeria in 2000, but he was not done yet with democracy activism, as he returned to the barricades in early 2010 at the height of the constitutional crisis engendered by the illness of President Umaru Yar’Adua as one of the leaders of the Save Nigeria Group. The group’s efforts were in part responsible for the peaceful resolution of a potentially catastrophic situation that threatened to engulf the entire country. Given this extraordinary commitment and passion, to date, he has been less than satisfied with happenings politically and economically in Nigeria. Thus, in his view, Nigeria is a caricature of the country he and others fought for to keep together.
General Akinrinade is married to his sweetheart Omowale and they are proud parents of Funsho, Bola, Odun, Leye and Ayo. He’s also a doting grandfather.

Not many people have so much content yet choose to hold on to the pillar of humility. His perspectives are always refreshing and he has mastered the art of striking a balance when things seem like tipping over.

We at DAWN Commission wish you a happy birthday and a future filled with happiness, joy and grace.

Adapted from: Alani Akinrinade, My Dialogue with Nigeria