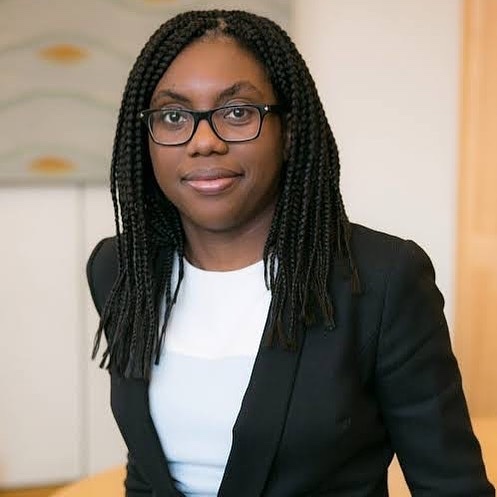 Olukemi Olufunto Badenoch was born in January 1980. She is a British Conservative politician and Member of Parliament for Saffron Walden. Adegoke was born in Wimbledon, London to parents of Nigerian origin. Her childhood was spent in Lagos, Nigeria and the United States. She moved to the United Kingdom at the age of sixteen, doing her A levels part time at an FE college in London and working part-time at McDonalds to help support herself.

She was an engineering apprentice before studying the subject at the University of Sussex. She is a member of the British Computer Society and the Women’s Engineering Society. She also studied law at Birkbeck, University of London. She has also worked as a maths tutor, a systems analyst and digital director at the Spectator.

Kemi has been both a primary and secondary school governor, holding the role at St Thomas the Apostle College, a Catholic secondary school in Southwark, south London, and Jubilee Primary School, in Lambeth, south London.
In 2012, Badenoch unsuccessfully contested a seat at the London Assembly. Three years later, Badenoch was selected as a London Assembly member after Suella Braverman and Victoria Borwick declined their seats after being elected as MPs at the 2015 general election. She supported Brexit in the 2016 EU membership referendum.

She was first elected as the Member of Parliament (MP) for Saffron Walden on 8 June 2017 following the retirement of former deputy speaker Alan Haselhurst, she became the first woman to represent that constituency.

She is a rising star in the Conservative Party, being chosen to introduce Theresa May at the party’s annual conference in 2017, and later that year being put in charge of selecting candidates for the 2022 general election.

Kemi has spoken about school funding in the House of Commons. In a speech in April 2019, she highlighted a school in her constituency suffering teacher shortages, relying on parental donations, and cutting school bus services. She has also raised concerns about the effect of universities giving pupils unconditional offers.

On the day Mr. Boris Johnson became prime minister, she tabled a question to the education secretary about a key Boris Johnson campaign pledge, asking “what plans he has to change regulations relating to schools so that they receive national funding formula per pupil de minimis levels in full”. Her only previous education-related written question was about student loans.

In July 2019, Kemi was appointed as Parliamentary Under Secretary of State for Children and Families by Prime Minister Boris Johnson.

DAWN Commission congratulates Mrs. Olukemi Olufunto Badenoch on her appointment as Parliamentary Under Secretary of State for Children and Families.

You are an Akinkanju!!!