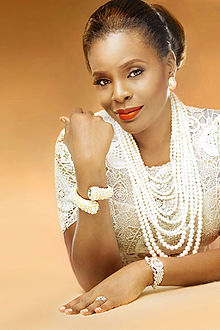 Olajumoke Olufunmilola Adenowo, a successful Architect, is the Founder and Principal Partner at AD Consulting.
Architect Adenowo, popularly referred to as the “Face of Architecture”, was born 48 years ago, precisely on the 16th of October 1968, in Oyo State. She was enrolled at the Federal Government Girls College (FGGC), Oyo, in 1978 for her Secondary School Education, and she graduated in 1983, receiving several awards for performing so excellently well in her academics.

She then proceeded to the Obafemi Awolowo University, Ile-Ife where she graduated in 1988 with a Bachelor of Science (B. Sc) in Architecture. Thereafter, she enrolled for her Masters Degree Programme immediately after graduation according to the tradition of the University that says all graduates of Architecture must run their Masters Programme before going for NYSC. She finished with a distinction in her Masters of Science (M. Sc) programme in Architecture; the first in several decades in the history of the University.

During her course of study at the Obafemi Awolowo University, she won several awards in her Faculty for her Academic performance. Upon completion of her Postgraduate Masters degree programme in 1991, she was included in the “Who Will Be Who” in the 21st Century (young achievers section) by the International Biography Centre, Cambridge, England. She began her professional career working with Towry Coker & Associates and Femi Majekodunmi Associates (where she designed the Federal Ministry of Finance in Abuja at age 23), after which she started her own multiple award winning Architecture and Interior Architecture firm, AD Consulting, an architecture and interior design firm, which has been involved in the design and construction of various projects in Nigeria.

The company has designed over 70 projects for the Nigerian Government and various corporate and financial institutions. AD’s clients include the world’s strongest brands like Coca-Cola and L’oreal, CRI, NGC, GTBank, amongst others. AD has won several international awards for its designs and is the only Nigerian architectural firm recommended by the British Chamber of Commerce for architectural services in Nigeria.

Her desire to raise Transformation Leaders inspired her to create the Awesome Treasures Foundation (ATF) in 1999; an NGO which has raised hundreds of entrepreneurs as well as mentoring and developing young architects through her “Discover Design” initiative and internship schemes.

The ATF also runs Camp Dawn, an educational camp, to address the education gap for inner-city kids. Awesome Treasures runs Synergy groups to closely mentor and groom women for Leadership and entrepreneurship. Awesome Treasures International and National Summits attract up to 5,000 people and over the years has attracted over 80,000 attendees in total.

As a motivational speaker, Architect Adenowo has delivered inspirational speeches at hundreds of conferences and summits within and outside Nigeria. She has hosted radio shows on leadership “Voice of Change”, Global Women’s Forum, Havard Business School [African Business Club], and featured in the World’s foremost Architectural Journals.

She was also a member of the Ekiti State Transitional Committee in 2007, and Chairperson of the National Tank Youth Development Committee (NTYDC) in 2008. She is a trustee and board member of a number of bodies including the National Reformation Centre, Grace Orphanage, Indian Ayuba Foundation and Governors board at Emanuel Etuh’s Foundation.

She is a recipient of several awards in the field of Architecture and also for her Philanthropic gestures.
She was given an award for her laudable achievements in Architecture and Women Development by her Alma mater.

In 2014, she was featured on a TV programme on CNN titled “African Voices”, and profiled on CNN as Africa’s “Starchitect”. She has also featured in the world’s leading Architectural Publication titled – “America’s Architectural Record Magazine”.

Architect Adenowo is an author of several books which include the much lauded “Lifespring, the Mothers’ Prayer Manual” and her most recent work “Designed for Marriage”. She writes a popular column on interiors on Thisday Style.

Olajumoke is an Associate Member of the Chartered Institute of Arbitrators- 2015 ACIArb (UK) and a Member African Leadership Network.