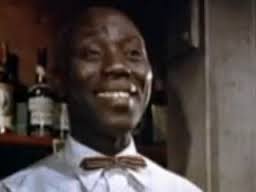 Orlando Martins was the first Nigerian Hollywood star, and also one of England’s most prominent and leading black actors back in the days

Orlando Martins was born on the 8th of December 1899 and died on the 25th September of 1985 at the age of 85. He was a pioneering Nigerian film and stage actor.

In the late 1940s, he was one of England’s most prominent and leading black actors, and in a poll conducted in 1947, he was listed among England’s top 15 favourite actors.

Orlando Martins acted with actors who later became Presidents of their countries such as Ronald Reagan (February 6, 1911 – June 5, 2004), the 40th President of the United States (1981–1989)
The Hasty Heart, a 1949 Anglo-American co-production directed by Vincent Sherman, playing “Blossom” the African soldier in Burma and played the role of “Klova” with Jomo Kenyatta (Prime Minister and the founding father of the Kenyan nation) in “Sanders of the River”.

Martins was born into a family of Ijebu and Amaro (Brazilian emancipado) descent. His parents and grandparents were steeped in the sometimes harmonious, sometimes conflicting traditional and cosmopolitan lifestyle of colonial Lagos. His father was a civil servant and part of the educated elites of that era, while his grandmother belonged to the legion of Lagos’ itinerant market women.

Orlando Martins was enrolled in Eko Boys High School in 1913, obviously to be groomed in his father’s career path but he dropped out on account of his grandmother’s business losses while travelling through German-controlled West African territory during WWI.

He worked briefly as a bookkeeper with a French produce-buying firm before he left Lagos in 1917 as a stoker on a merchant ship. He began acting on stage in London of the interwar years during which he joined a circus in 1919, where he worked as extra in a ballet company and in 1920s silent films.

He was also a singer in the Mississippi chorus of the Theatre Royal production, Show Boat, in the 1930s. In 1923, Sanger’s Circus wanted to have someone to display pythons, Martins took the part starting his performing career in the circus.

He also worked as a wrestler (known as “Black Butcher Johnson”He made one of his most enduring career relationship around this time when he appeared on stage with Paul Robeson in Stevedore (1935) and Toussaint L’Ouverture (1936).

He first met Robeson on the set of Sanders of the River in which the great American tenor played Mosambo, the lead character. Orlando and Jomo Kenyatta, the man who became the first president of independent Kenya, were both cast as extras in the film.

In 1948, a review of Orlando Martins’ roles in the films ‘The Man from Morocco and Man from Two Worlds’ described the actor as “a tall, powerful figure of a man with a deep bass voice, friendly, hospitable and with a grand sense of humour.”

The two film roles for which Orlando Martins received the review were shot after WW II when he was arguably the best known black character actor in Britain.

The role of Moghale, the influential witch doctor in Man from Two Worlds endeared him to the film going public but it did not improve his career prospects significantly.

The character portrayed a friendly African native, the typical typecast of black actors as exotic, two-dimensional backdrop for white settlers, missionaries or adventurers.

There were lots of exchanges and collaborations between European and Hollywood film makers at this time and Orlando struggled to secure realistic and challenging roles.

Orlando Martins was part of a group of UK-based black entertainers who tried to form a Foundation for Negro Theatre in London. Their mission was to provide a forum to show the breadth of talents in the black community but the foundation never took off. Orlando did get other employment on stage and screen in Hollywood and London. He played Blossom, a Basuto warrior on the stage and screen production of Hasty Heart. The screen version starred Ronald Reagan, 40th president of the US. He appeared on the stage adaptation of Cry, the Beloved Country in London’s Trafalgar Square (1954), and The Member of the Wedding at the Royal Court (1957).

lo in Cry, the Beloved Country (ITV, 1958), before that he played the runaway slave, Jim, in BBC’s Huckleberry Finn (1952). The 1950s was probably his most productive decade.

He returned to Lagos in 1959 on the eve of Nigeria’s independence and went into semi-retirement. He accepted only film roles in the 1960s and was more selective about the characters he chooses to play. He played the character of tribal chief in three films, ‘Mister Moses’ (1965), ‘Call Me Bwana’ (1963) and ‘Killers of Kilimanjaro’ (1960).

Martins embarked on the last phase of his acting career in 1970, he took what was probably the most dignified character he ever played when he was cast as Dr. Gbenga in the screen production of ‘Kongi’s Harvest’.
It had the reputation of being the first all-Nigerian feature film but it was a box office disaster. That did not stop Orlando from working on another all-Nigeria production, the film version of Chinua Achebe’s Things Fall Apart (1971).

Martins’ stage, screen and television portfolio made him one of the most recognized name and face in entertainment at this point in his career. In spite of the limited range of character portrayals, he was severally honoured in all the places he called home. In 1970, he became one of the first black actors recognized for his contribution to British films, he was awarded honourary life membership of the British Actors’ Equity Association.

In 1982, Orlando was one of the honorees who received Nigeria’s national awards, he was recognized with the medal of Membership of the Order of the Niger (MON). Not to be outdone, the government of Lagos, his home state, made him an advisory member of Lagos State Arts Council, the executive body in charge of all cultural activities and infrastructures in the state.

He held that position till he passed on in 1985, after which the State founded the Orlando Martins Awards in his honour.