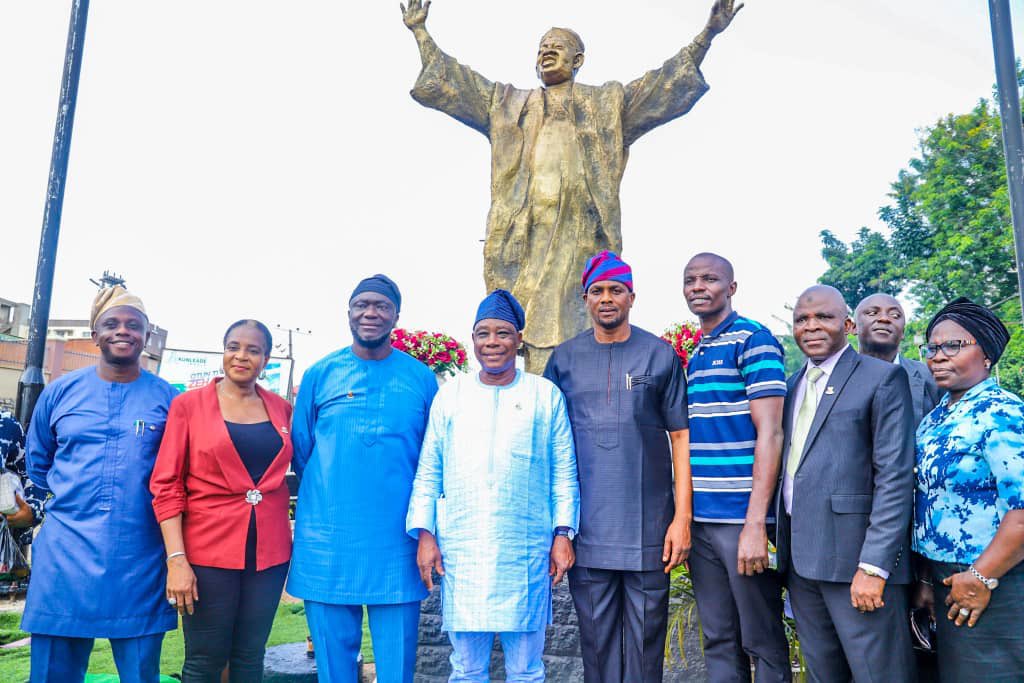 As part of celebrations honouring the late Moshood Kashimawo Abiola, MKO, who was a champion of democracy in Nigeria, the Oyo State government has unveiled one of the largest statues in his honour.

The deputy governor, Bayo Lawal, expressed optimism that the monument will permanently crystalise what Bashorun Moshood Kasimawo Olawale Abiola (MKO), Nigeria’s icon of democracy and the man who was declared the winner of June 12, 1993, Presidential Election, stood for.

Lawal, who spoke on Wednesday at the MKO Abiola Garden in Ringroad, Ibadan, acknowledged the good gesture of His Excellency, ‘Seyi Makinde, in erecting the statue of the late statesman who during his time fought for democracy.

He said the struggle he put in place to ensure democracy, which everyone is enjoying today is laudable and well-recognised by the Oyo State government, adding that he deserves the best from the nation.

Lawal further emphasised that it was customary for the state government to honour and remember individuals who made significant contributions to the greatness of the country. According to him, the histories of Oyo State and MKO Abiola are intertwined because it is impossible to discuss democracy in Nigeria without mentioning Abiola.

He asserted that: “MKO has been recognised at the national level even though many administrations have been unable to do so, but the current federal government was able to recognise him just like the Oyo State government, and we will continue to recognise his gesture and determination of democracy.

“The statue erection especially now that election is fast approaching will stand as a reminder that we need to put at the back of our minds that no other system of government is better than democracy and this legacy which MKO Abiola has given us indeed in the Southwest and Nigeria would be sustained”, he added.

Earlier in his remarks, the Commissioner for Environment, Hon Abiodun Oni, said there’s no denying that the story of Nigeria’s Fourth Republic will be incomplete without a mention of the name of MKO Abiola

“In truth, no honour is enough or too much to celebrate what he means to Nigeria or Nigerians. This majestic statue is a symbol of that legacy.

“The location of this symbol is also strategic being on one of the major roads and entry points into the Ibadan metropolis and one named after the honouree himself.

“I have to thank Mr Adesoji Williams of Jacbeth Multi-links services very specially for his uncommon gesture and the thought behind this project. He has shown that citizens can be catalysts for development in our state.

“It must be mentioned that Mr Williams single-handedly funded this project. In appreciation of his perineal efforts to community development is the reason why the governor approved the project and high powered government delegation led by His Excellency, the Deputy Governor to unveil the statue of one of our country’s icon of democracy,” he added.

In the meantime, other dignitaries who graced the occasion were; Commissioner for Environment, Hon Abiodun Oni, the Personal Assistant to Oyo State Governor, Alhaji Akeem Azeez, Chairman Oyo Gaming Board, Mr Olajide Boladuro and the initiator of the statue erection, Mr Adesoji Williams.