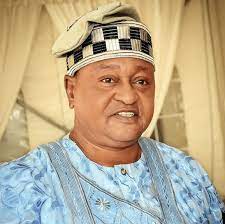 Prince Jide Kosoko was given the traditional title of prince or “Omoba” in the Yoruba language when he was born on January 12, 1954, into the Kosoko royal family of Lagos Island. Veteran Nigerian actor, director, and producer Prince Jide Kosoko is from Nigeria. The Association of Nigerian Theatre Arts Practitioners was led by him (ANTP). He performs in movies in both Yoruba and English. One of the movie stars who began as a child actor and has successfully worked in the industry for almost 60 years is Jide Kosoko.

In addition, Jide Kosoko is a well-known film director. Over four successful films, including Olorire and Arewaokunrin, were produced by him. Even the United Nations Development Programme (UNDP) chose him to make a climate change documentary. The production titled Battle for life is still in the production process.

Kosoko was raised in Ebute Metta and was motivated to pursue acting by Hubert Ogunde’s success. The Prince began his acting career at the tender age of 10. He was invited to try out for a part in the Ifelodun Travelling Theatre production of the telemovie “Makanjuola” by a friend who enjoys theatre. He went to the audition and was given the part where he played “Alabi.” He appeared in this movie for the first time, which was released in 1964. Jide Kosoko finished primary and secondary school in Lagos Island, Lagos State, Nigeria, earning both his First School Leaving Certificate and West African Senior School Certificate. He then attended Yaba College of Technology to pursue his Higher National Diploma, or HND, in Business Administration. Later, at the age of 60, he returned to school. He studied performing arts at Olabisi Onabanjo University in Ogun State.

To further his acting career, he was allowed to perform with the Awada Kerikeri group, which included renowned actors such as Sunday Omobolanle, Oga Bello, and Lanre Hassan. Additionally, he appeared as a special guest on the New Masquerade, a well-known TV program.

He spent eight years performing with the group before starting his own theatre company, “theatre troupe,” in 1972. After the release, Jide Kosoko continued to write and produce his stage plays and movies, among them Ogun Ahoyaya. Along with other well-known Nollywood actors and actresses like Sola Sobowale, Femi Adebayo, Lanre Hassan, Sunday Omobolanle, and many others, Jide Kosoko is a member of the well-known Awada Kerikeri group, which was founded by Oga Bello (Adebayo Salami). The group Awada Kerikeri produces a Pidgin-English program that is always broadcast weekly.

His portrayal of what he is doing as real has helped to advance his career in the film industry. Jide Kosoko has performed in both Nigeria and other countries in English and Yoruba Nollywood films. As the years go by, Jide Kosoko continues to appear in numerous films, the majority of which he also starred in. He is an established actor on the A-list as well as a father and an inspiration to many up-and-coming actors.

He typically plays the role of a father or king, though he has also played other, completely unrelated characters. Because he plays his roles so well, film producers will go above and beyond to cast him in their productions.

Prince Jide Kosoko currently serves as the board chairman of the Nigerian Association for Theatre and Motion Picture Practitioners (TAMPAN).