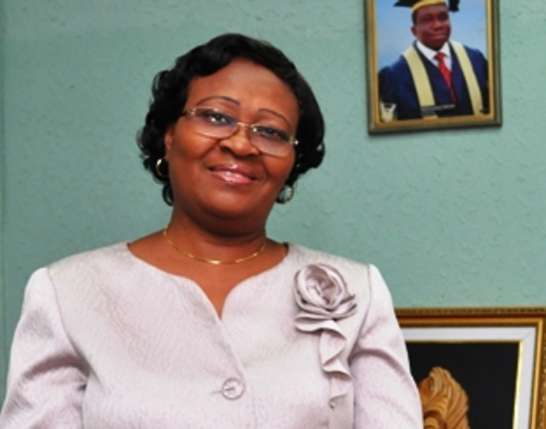 …the 1st Female Professor of Physiotherapy In Africa

Prof. Arinola Olasumbo Sanya is a Professor of Physiotherapy at the University of Ibadan and a former commissioner of health in Oyo State, Nigeria.

Prof. Arinola is the Immediate Past Deputy Vice-Chancellor, (Administration) at the University of Ibadan. She was born in Lagos State on the 25th of April, 1953. She began her elementary education at the Salvation Army Primary School in Surulere, Lagos in 1966.
Thereafter, she was admitted into the prestigious Queen’s College Yaba, Lagos where she obtained her Higher School Certificate in June 1973.

Her stay at the Queen’s College was remarkable, being marked by her excellent grades at both the Ordinary and Advanced levels of GCE, as well as being the Head Girl of the esteemed girls’ College.
It is noteworthy that Professor Sanya was admitted into the prestigious Queen’s College Hall of Fame in October 2002.
She gained admission to read Physiotherapy at the University of Ibadan in September 1973 and graduated in June 1976.

She returned to UI for her Postgraduate degree where she obtained both a Masters Degree and a PhD degree in Exercise Physiology in 1981 and 1986 respectively.
Her first employment as a University teacher was in the University of Ibadan as a Graduate Assistant in April 1978 and she climbed every rung of university promotion ladder from being an Assistant Lecturer in 1981 to becoming a Professor in October 2000.

Prof. Arinola has proudly flown the flag of the Ibadan College of Medicine during stints of academic activities at the College of Applied Medical Sciences, King Saud University, Riyadh, Kingdom of Saudi Arabia between 1990 to 1992 as an Assistant Professor, Hamad Medical Corporation, Doha, Qatar in 1997 as a Locum clinical teacher and the College of Medicine, University of Lagos between July 2004 and June 2005 as a Visiting Professor.

She is also a regular face at scientific conferences, workshops and seminars in addition to being a well published physiotherapy scientist. She has published several articles in peer-reviewed journals, monograms, conference proceedings and chapters in books.

Prof. Arinola has contributed immensely to the academic development of the University of Ibadan, not only in terms of teaching, but she has successfully supervised research works of more than 75 undergraduate and postgraduate students including six completed PhD works. She was the Coordinator, Acting and substantive Head of Physiotherapy Department at various times.

As a result of her expertise, uprightness and vast knowledge of academic and extra-curricular subjects, she has served the nation as a member of the National Universities Commission’s panels to accredit University programmes at the undergraduate levels in Physiotherapy, Medical Radiography, Physiology, Biochemistry, Anatomy, Medicine and Nursing.

Professor Arinola has served as a Member of the Medical Rehabilitation Therapists Registration Board of Nigeria from 1993 to 2007, a Member of the Board of the University College Hospital, Ibadan in 2005, the Vice-Chairman of the Oyo State Action Committee of HIV/AIDS and as the Commissioner for Health in Oyo State during the administration of Governor Rasheed Ladoja in 2005.

She is a Consultant Physiotherapist to the University College Hospital (UCH), Ibadan and she sits on several management level committees at the University of Ibadan such as the Appointments and Promotions Committee.

She has written several books, journals and articles which has contributed immensely to the study of Physiotherapy. She is also a recipient of several honours and awards.