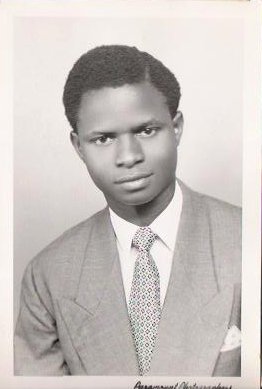 …the First Nigerian Engineer to be Awarded the National Merit Award

He has also served on the Executive Committee of the International association for Bridge and structural Engineering, Zurich and was Vice-President of the Association for many years. Prof. Oladapo holds a D. Sc (Honoris Causa) of the Ondo State University and was also honoured by both the Nigerian Society of Engineers in 1992 for “outstanding contribution to engineering education and practice” and by COREN in 1997.

From the All Saints Primary School in Ondo, Ifedayo gained admission into Government College, Ibadan, in 1948, where his outstanding talents began to blossom. He was easily one of the most accomplished in his class, as he went on to become the Head of House (Carr House), Head of School and Captain of Athletics. He made first grade in the Cambridge School Certificate. After a stint at the Nigerian College of Arts and Science in Zaria, he entered the University College, Ibadan in 1954 for the preliminary programme in engineering. He proceeded to the University of St. Andrews in Scotland, where he acquired his B.Sc degree in Civil Engineering with First Class honours, winning the Gold Medal for the best student in civil engineering in 1959.

Oladapo then moved to the University of Cambridge (Christ College), where he obtained his doctorate degree in Structural Engineering in 1962.

He joined the leading Danish consulting firm, COWICONSULT (then known as Ostenfeld and Jonson) and soon proved his mettle in the area of concrete structures. Within a short time, he had learnt enough Danish, not only to explore the code of practice in that area of specialty, but teach the skills to young colleagues in the firm. He also had a unique opportunity to participate significantly in the design of motorway, river and suspended bridges. The experience prepared him effectively to confront major challenges in reinforced concrete structures in the tropical environ-ment in ensuing decades.

Both in Europe and the United States, he carried out joint studies that were acknowledged world-wide through the incorporation of their outcomes in the Limit State Code for Concrete in Europe and the American Concrete Institute Building Code of 1967.

Prof. Oladapo obtained some practical experience as a Designer engineer in Denmark before returning to Nigeria to start an academic career. Prof. Oladapo lectured at Ahmadu Bello University, Zaria and the University of Lagos where he rose to the post of Professor in 1970.

On returning to Nigeria, Oladapo actively participated in the design and construction of many concrete structures in Lagos. Some of them include the Concrete Shell Roof, the Eko Bridge, and the Third Mainland Bridge. He also played key roles in the construction of the Benue River Bridge and later, the Niger Bridge in Onitsha.

Prof Oladapo was a distinguished scholar who has made significant contribution to knowledge in his specialization of structural concrete. He has served as Visiting professor in several Universities in Europe and United States of America. Prof. Oladapo was invited to become the foundation Vice-Chancellor of the Ondo State University in 1982 and he successfully built up a good reputation for the University during his two terms in office.

At the professional level, Prof. Oladapo was involved in the design and construction of some of the major projects in the country. He has indeed made tremendous contributions to the development of engineering education and engineering profession in Nigeria. He was active in the Nigerian society of Engineers and became the First Vice-President in 1977. He was elected to COREN in 1971 and became President from 1974 to 1997.

He was inducted into the Hall of Fame for Science and Technology in New York; made a Fellow and elected Vice-President of the International Association of Bridge and Structural Engineering in Zurich; Fellow of the Institution of Civil Engineers in London; and Consultant to UNESCO in Engineering Education.

Oladapo\’s academic and administrative endowments were amply demonstrated in his appointment to a Chair of Engineering at the University of Lagos at the age of 38, and a year later, he became the Dean of Engineering in the university, and was later elevated as the institution\’s Deputy Vice-Chancellor (1977-1979).

A one-time President of the Ondo Club 75, his commitment to the cause of social, physical and economic development of Ondo Kingdom made him a natural choice as the chairman of Ondo Development Committee. His input into the design and supervision of the construction of the Oba Adesanoye Civic Centre was also substantial.

He received Doctorate in Science (honoris causa) of the Ondo State University (now University of Ado-Ekiti) in 1993; and Adekunle Ajasin University, Akungba, Ondo State, in 2007. He was made Yegenha of Ondo by the Osemawe, and Kayejo by the Oba of Ipesi-Akoko. In 2000, he became the Officer of the Order of the Niger, a national award.

He served on boards of several organisations, including the Citi Bank, and was until his death, Chair of the Judges Committee for the Liquefied Natural Gas Science Prize Competition.