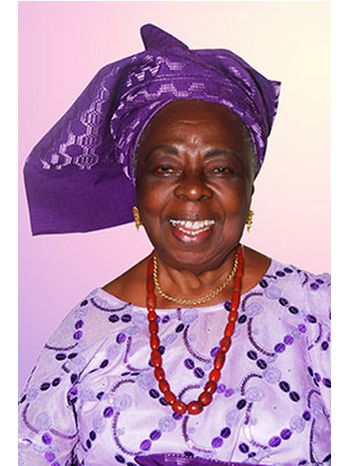 …the First Female Professor in Nigeria

Professor Felicia Adetowun Ogunsheye is a woman activist as well as a pacesetter in the field of education generally, and library science in particular. She had the distinction of being the first woman to have excelled in many fields that were, before her time, the exclusive preserve of men.

Professor Adetowun Ogunsheye was born in Benin City, on December 5, 1926 to the family of James Herbert Odukoya and Sabina Banjo of ljebu-Ode. They were enlightened parents who placed a great premium on the education of their children, male and female. Having first attended the prestigious Queen’s College, Lagos, from 1939 to 1945, Adetowun gained admission to the Higher College, Lagos, in 1946. In 1948, she moved with the other students of Higher College to Ibadan as the pioneering students of the newly established University College, lbadan (UCl), now the University of Ibadan. Her stay in UCI was short as she gained admission, in 1949, to Newham College, University of Cambridge, thus becoming the first African female to attend that University.

Professor Ogunsheye obtained a degree in Geography in 1952 and took up a teaching job as the founding principal of Anglican Girls’ Secondary School (now St. Margaret’s School), Ilesha, in the then Western Region of Nigeria. Thereafter, she transferred her services to St. Anne’s School, Ibadan, where she taught from 1953 to 1956. In 1956, she moved to the Nigerian College of Science and Technology, Ibadan, a post-secondary institution, where she taught Geography for two years on a part-time basis.

However, in 1958, she left teaching and began a new career in what was to become her enduring profession and preoccupation. She was invited by John Harris, the University Librarian, to join the staff of the University of Ibadan as Assistant Librarian in charge of map collection. As a graduate of Geography and one well grounded in Cartography, at the time a rare and much sought after field of specialisation, she became the Map Librarian in which capacity she made a study of old maps of Africa. Her findings were published in the Journal of the Geographical Association of Nigeria. She also introduced a new classification scheme for organising African map collections.

In 1962, to give her a more solid and professional grounding in the field of library science, she went on a sabbatical to study for a master’s degree in Library Science at Simmons College, Boston, Massachusetts. In 1963, she was appointed a lecturer in the newly established Institute of Librarianship, the forerunner of the present Department of Library, Archival and Information Studies (LARIS) of the University of Ibadan. Ten years later, she was appointed a professor and thus has the distinction of being the first Nigerian woman to attain that position in the University of Ibadan and, indeed, within the Nigerian university system as a whole.

She served as the Head of the Department of Library Studies from 1970 to 1977. Her tenure witnessed some landmark developments in the field of library studies not only in the University of Ibadan but in Nigeria as a whole and even beyond. She introduced a number of programmes: first, the Postgraduate Diploma in Librarianship, followed by the Masters and then the Doctorate programme in Library Science. Her Department created a record by becoming the first Library School to offer the doctoral programme in Librarianship.

It was also at this time that she founded the Abadina Media Resources Centre, University of Ibadan. This was in 1974. The Centre was established to encourage children, especially those from less privileged homes, to develop the habit of reading. The Centre has since served as an important and useful training ground for librarians who specialise in the development of children’s literature and libraries. The Centre has also become a reference source for efficient school library programme, and currently runs courses at diploma and postgraduate levels for school library and media personnel.

Professor Ogunsheye’s contributions extend beyond scholarship in her chosen field of library studies; she served the University in other useful areas of university life. She served, for example, variously as: Assistant Hall Warden, Hall Warden and, later, Hall Mistress from 1963 to 1976. In 1977, Professor Ogunsheye was elected Dean of the Faculty of Education (1977- 1979), thereby becoming the first woman to hold this position in the university. She was also a member of the University Senate from 1968 to 1987.

She has given much voluntary service in the course of her life and has been a committed woman activist who has been in the forefront of those who campaign ceaselessly for equal opportunities for men and women. She was the president of Women Improvement Society (WIS) from 1959- I 961, a society of mostly educated women in Ibadan with one of its objectives being the provision of day care for children and some literacy for market women in Ibadan. It was that group that transformed into the National Council of Women Society (NCWS) of which she became the first secretary. She was also at different times the pioneering secretary, West African Council of Women Societies 1960-1961; Vice-President, Zonta Intemational, Ibadan, 1971-1973; president, National Association of University Women, 1971-1975.

These contributions have not gone unnoticed nor unrewarded as attested by the awards she has received in the different fields where she has made her mark. Some of these awards include: Ford International Fellow, 1961; the Hon. D.L.S. of Simmons College, 1969; the Simmons College International Alumnus Award, 1979; the Fulbright Fellowship for Senior African Scholars, 1980; the Decade of Women Certificate of Merit for Outstanding Achievement, 1985; Fellow, Nigerian Library Association, 1982 and Nigerian Academy of Education, 1985; Hon. Doctor of Letters (D.Litt.) University of Maiduguri, 1990; and the International Education Hall of Fame, Nigeria, 2000. She also holds the chieftaincy title of Iyalaje of I1e-Oluji 1982.

Professor Ogunsheye retired from the university of Ibadan in 1987. She has, however, continued to render meritorious services to her society and continues to write for children and the youth. She is currently the president of the Ogunsheye Foundation, a Research Library designed for research students.

She is married to the late Professor Ayo Ogunsheye and is blessed with a son and grandchildren.

Prof, all of us at DAWN Commission celebrates you for your courage and notable achievements.

You are truly an AKINKANJU