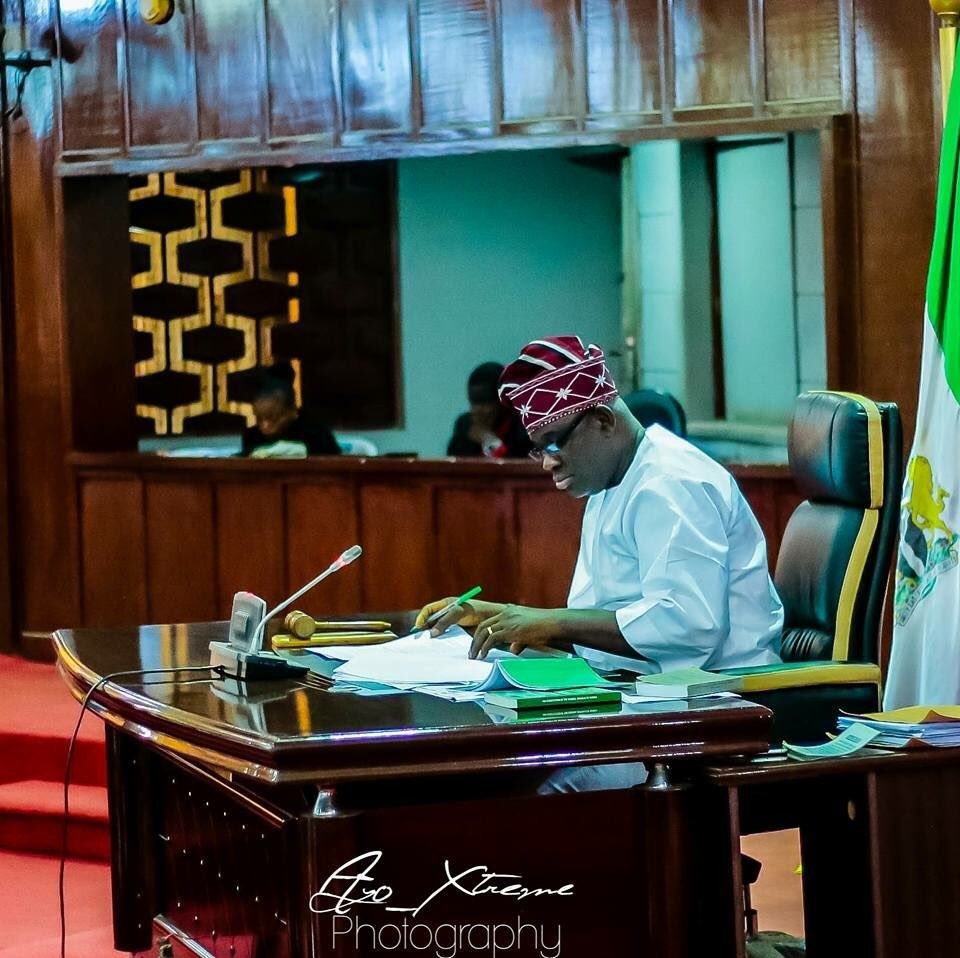 Over four decades ago, precisely 47 years, the Adeyemo Family of Alaarun compound, Lanlate, Ibarapa East Local Government Area of Oyo State and indeed Nigeria was blessed with the birth of Rt. Honourable Adesina Michael Adeyemo, the Honourable Speaker of the Oyo State House of Assembly, OYHA, popularly called AMA by his numerous fans.

He was the first child of the family.

He attended IMG, Oke Ado, Ibadan for his primary school education and Celestial Church High School, Oke Ado, Ibadan for his secondary school education. Understanding that education is the best legacy, it makes a man easy to lead, but difficult to drive; easy to govern, but impossible to enslave. In his quest for higher education, he later proceeded to the University of Port Harcourt where he obtained a Bachelor’s degree in Education Management with second class upper.

Due to his unwavering passion for the Legal Profession, Adesina Michael Adeyemo (AMA) later attended the prestigious University of Ibadan (UI) for his LL.B in Law and qualified as a Lawyer in 2004. Taking his destiny in his hands, he worked with Olujinmi & Akeredolu law firm.

Rt. Honourable Adeyemo first shot in politics was in 2007 and since then he has been in politics till date. He was the Deputy Chief Whip of the House and a member of committees of fund allocation, works and transport, Agriculture, trade and investment, appropriation and public finance in the just concluded 7th Assembly.

A trailblazer of sort, Honourable Adeyemi strongly believed that integrity should be pertinent, germane, paramount and cherished. It is not a gain saying that he is one of the engine rooms of the 7th House of Assembly, his opinions and contributions on bills and motions are highly respected by members.

He was a member of the Nigerian Bar Association (NBA) and International Bar Association (IBA), he served in the executive committee as an auditor and Assistant Secretary of NBA, Ibadan branch.

His ilk constitute great blessing to Ibarapa East Local Government and environ. Beyond his legislative exploits, he brought tremendous development to his people, while impacting several lives, raising hopes, showing what good governance, democracy and its dividends is all about. Honourable Adeyemo’s monumental achievements and giant strides speak great volume of his tenacity, doggedness and pertinacity.

He facilitated the autonomy of two campuses of tertiary institutions in his constituency – The Polytechnic Ibadan, Adeseun Ogundoyin Campus, Eruwa and Emmanuel Alayande College of Education, Lanlate through His Excellency, Senator Abiola Ajimobi, Executive Governor of Oyo State and other State Government projects, both completed and on-going.

As a confirmation of confidence his people reposed in him which he represents, Honourable Adeyemo’s re-election is the first time a member will be re-elected to the House of Assembly from his constituency – Ibarapa East.

According to Mr. Speaker, Rt. Honourable Adesina Michael Adeyemo, he said, “my vision for the Oyo State House of Assembly is to ensure continuity and sustenance of peace in the 8th Assembly having a robust and constructive relationship with the executive and give maximum support to the Government in his development plans for the benefits of the people of Oyo State without compromising the independent and integrity of the Legislative arm.

Rt. Hon. Michael Adesina Olusegun Adeyemo, the Honourable Speaker of the 8th of the Oyo State House of Assembly, died on Friday, 27th April, 2018 at the age of 47.

May his soul rest in peace