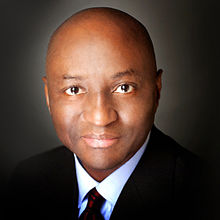 Born on May 8, 1955 in Kano, Nigeria, to a technician father working for the Nigerian Railways, Tayo Aderinokun had his primary education at the Baptist Day School, Kano, from 1961 to 1966.

He went on to obtain a Bachelor’s degree in Business Administration from the University of Lagos, and much later, an MBA in International Business from the Graduate School of Management, University of California, Los Angeles in 1981.

Tayo Aderinokun began his banking career at the Central Bank of Nigeria, Calabar, where he underwent the mandatory one year national service programme (NYSC) in 1977/78. He went on to work for Chase Merchant Bank Nigeria Limited (later Continental Merchant Bank) between 1981 and 1988.

In 1988, Tayo moved to Prime Merchant Bank as an Assistant General Manager and Head, Financial Services. He resigned this appointment in 1989 to start First Marina Trust Limited a non-bank financial institution which he oversaw until co-founding Guaranty Trust Bank with his close friend, Fola Adeola in 1990.

At the inception of Guaranty Trust Bank, Tayo Aderinokun assumed the mantle of Deputy Managing Director a position he was to hold for the next 12 years. During this time, he was involved in the supervision of the Bank’s operations with direct responsibility for asset management and liability generation.

His experience, commitment, and contributions during this period were fundamental to the impact the Bank had on the Nigerian economy over the next few years, which included the introduction of a more customer friendly form of banking that has now become the industry norm.

Tayo Aderinokun became Managing Director of Guaranty Trust Bank in August 2002, after the resignation of Fola Adeola, and he successfully steered the affairs of the Bank until his demise on June 14th 2011, to the enviable position of one of Nigeria’s most stable and secure financial institutions.

Under Tayo’s leadership, the Bank gradually became an internationally recognized institution with vast business interests spanning Anglophone West Africa and the United Kingdom. Innovations such GTConnect, Slip free, the Naira Mastercard and Drive Through banking were introduced to ensure banking became a more convenient experience for the public. In addition the Bank pioneered the foray of Nigerian Banks into the international capital markets, by raising funds severally and becoming the first Nigerian Company and African Bank to be listed on the Main Market of the London Stock Exchange.

Tayo Aderinokun’s stewardship is however more ably summarized by the numerous accolades and commendations received by the bank over the years, which include:

A further testimonial to his leadership prowess is the fact that Guaranty Trust Bank emerged largely unscathed, from the recent global economic crisis that shook the Nigerian Financial sector, due to sound management principles, good corporate governance structures and overall operational transparency.
Tayo Aderinokun’s statesmanship and contributions to the Nigerian Banking sector led to various recognitions during his lifetime that include; the conferment of the national honor: Member of Federal Republic of Nigeria by erstwhile President Olusegun Obasanjo, the 2009 African Banker of the Year Award by African Banker Magazine, the 2009 CEO of the Year Award from Thisday Newspapers, the 2009 Sun Man of the Year Award and the 2010 PEARL CEO Leadership award.
Mr. Aderinokun was not just a banker, he was also a poet, educationist and philanthropist, supporting various causes, especially those related to the Arts, Child healthcare and Education.

Tayo Aderinokun was one of the most influential and respected bankers the nation has produced in the last 30 years. An astute and erudite gentleman, his dedication to hardwork, honesty and a thirst to always improve the status quo were a mix that had a colossal impact on the Nigerian financial scene, especially after the inception of Guaranty Trust Bank.
These traits and the simple lifestyle he maintained, led to his becoming a mentor and friend to the vast number of people who knew or worked with him over time.