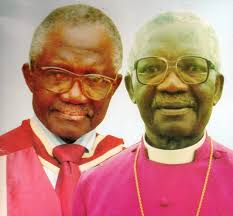 Professor Theophilus Olatunji Taiwo Olowokure and Rt. Reverend Jacob Olabode Kehinde Olowokure were born in Ijebu-Jesa, their home town, on September 10, 1929. Certainly the two great men deserve to be celebrated for so many perceptible reasons. Giving birth and raising twins in the late 1920’s when there was a high mortality rate requires great effort. It takes greater effort for the identical twins to celebrate together 90 years in good health and remain happily married to very caring and virtuous wives. They lost their father when they were young and through hard work and persistence they got to the pinnacle of their chosen careers.

Apparently, what they both achieved must have been born out of sheer drive to succeed and excel by remaining focused on what they have set out to do. As such, the scholar and his twin brother, the Lord Bishop should be celebrated to serve as an inspiration to many people worldwide.

Not many people have so much content yet choose to hold on to the pillar of humility which is one of the ethos of Omoluwabi.

Professor Theophilus Olatunji Taiwo Olowokure obtained his first degree through correspondence and continued in his academic pursuit to become Professor of Accounting at University of Maiduguri where he served meritoriously for 31 years.

He has spent over six decades in the business of molding and producing high caliber and ethical man power in Nigeria through mentoring, supervising and teaching. He has held numerous administrative positions in and outside the University of Maiduguri. He was head of the Department for several years, chairman of various academic committees and Deputy Vice Chancellor before he left the institution.

He has many scholastic publications in local and international Journals with over one hundred publications. He has supervised several Theses/Dissertations. He has also been given professional appointments in various organizations and attended various local and international Fellowships, International Courses, Conferences and Workshops. He is a member of many learned and professional associations and he has also been external examiners to many institutions in Nigeria.

Even after he retired from the University of Maiduguri, he continued to contribute to the growth and development of the country. He was appointed as a lecturer at the Joseph Ayo Babalola University (JABU), Ikeji-Arakeji, Osun State in 2010 where he also served  as the Acting Vice Chancellor of the institution. Rt. Reverend Jacob Olabode Kehinde Olowokure took over as the Diocesan Bishop after the retirement of Bishop J. L. Akeredolu on June 29, 1986. At his arrival as the Diocesan Bishop, he had multi-dimensional programme of activities which includes Evangelism, Church planting, administrative restructuring, expansion of the of the economic base of the Diocese and educational development. This agenda of his were faithfully and vigorously pursued. Consequently, his thirteen years’ tenure as a Bishop was a watershed in the history of Anglicanism in Akokoland. Many new churches were founded, a new Nursery and Primary School and a secondary School were founded.

On the Economic sector, he facilitated the collaboration between the Diocesan and notable sons of the Diocese in business. Top of the list are Late Chief R. F. Giwa and Chief Dr. J.O. Sanusi. As a proof of huge success recorded, the Diocesan Budget rose from N320,000 in 1986 to over N12,000,000 in 1999.

The tenure of Bishop J.O.K. Olowokure was said to be a golden age. The Clergy were encouraged to further their education, preferment was bestowed on merit, experience and effectiveness.

We at DAWN Commission wish you a happy birthday and a future filled with happiness, joy and grace.

To the distinguished celebrants, DAWN Commission wishes you more years in good health.